A 36-year-old Greencastle man has been charged with public indecency as a result of a pre-dawn incident recently along a portion of the People Pathway near First Baptist Church.

Daniel L. Rivers, who has been residing with a friend at a Judson Court apartment near the location of the Oct. 9 incident, appeared in Putnam Superior Court Tuesday afternoon to answer charges of public indecency. He is also facing criminal mischief charges in another unrelated case.

Special Judge T. Edward Page entered a not-guilty plea on Rivers' behalf to the charge of public indecency, a Class A misdemeanor punishable by up to one year in jail and a fine of up to $5,000. 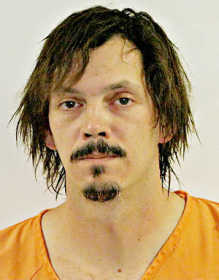 Rivers was arrested Monday evening at the Greencastle Police Department after being picked up for questioning earlier that day at Robe-Ann Park when Officer Darrel Bunten spotted the suspect sitting under the shelterhouse by the skatepark, smoking a cigarette.

The victim in the Oct. 9 case, who was not in the courtroom Tuesday, had picked Rivers out of a photo lineup, and his physical description (including distinctive facial hair) matched that of the man Bunten saw in the park.

The incident unfolded between 1 and 2 a.m. Oct. 9 as the victim walked her dog between the Brentfield Subdivision and Round Barn Road along the People Pathway in the area between Fawn View Lane and Judson Drive behind the church.

She initially saw a male suspect walking in the opposite direction and paid little attention to him until her dog turned and lunged at something behind them a few moments later.

Expecting to see an animal of some kind, the woman instead saw the suspect coming toward her and said his demeanor frightened her, the probable cause affidavit notes.

Rivers appeared to mumble something as he neared, the victim told police, and she asked if he were talking to her.

That's when he made an aggressively suggestive remark and reportedly exposed himself.

When he got within five feet of her, the woman said she screamed "loudly, fearfully and angrily" for him to leave her alone and began walking backward on the pathway. She said the suspect continued to pursue her until she reached the intersection of Judson Drive and the pathway near Ridgeland Road.

It was there that she turned and screamed again, hoping to draw the attention of anyone nearby and to discourage him from following her.

However, Rivers allegedly approached her three more times along Glenview Drive, forcing her to repeat her verbal warnings to leave her alone. After that he reportedly fled in another direction, although the victim feared he would double back on the pathway and cut her off.

The woman recalled seeing the suspect before as he walked along Ridgeland Road dressed similarly (brown hooded sweatshirt, ball cap and tennis shoes). She told police she also recognized his strong smell of cigarette smoke and the way he carried himself.

Officer Kyle Lee noted that Rivers also fit the description of the man wanted in a recent criminal mischief case in which a female victim had her tires slashed and threatening messages spray-painted on her car in the 700 block of Seminary Street. A no-trespassing order has been issued against him in that matter.

In court on Tuesday, Judge Page had some difficulty in getting Rivers to understand some of what was occurring.

At one point, the judge asked the defendant how long he had been in the Putnam County Jail. When there was no immediate response, the judge, mistaking the Oct. 9 date of the incident for the date of Rivers' arrest on his paperwork, suggested, "Six days?"

Rivers responded in the affirmative before Deputy Prosecutor Justin Long interjected that the suspect's PCJ stay was only one night at that point since his arrest came Monday evening.

"Did you just lie to me?" Judge Page asked Rivers.

"I agreed with you, sir," the suspect replied. "You had that information, I didn't.

"I don't know what day it is," Rivers continued. "I don't know how many nights it has been, I sleep a lot during the day."

Ordering Rivers held on $750 cash bond, Judge Page suggested jail was perhaps the best place for him at the moment.

"It causes me some concern," the veteran visiting judge said, "when you can't tell whether it's been one day or 10 days. I think you're better off with some place to sleep and three square meals."

In appointing public defender Scott Adams as to represent Rivers, the judge set the next hearing in the case for 11 a.m. Jan. 29.