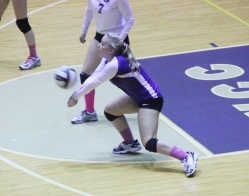 Greencastle senior Danielle Thomas returns a serve during a match earlier this season. Thomas is a backrow specialist for the Tiger Cubs. (Banner Graphic/GRANT WIEMAN)

MONTEZUMA -- Two months ago, Greencastle's volleyball squad was just picking up its first win of the season yet, much like in seasons' past, it had already picked up three early losses.

Greencastle head coach Maggie Walters said that the girls had proven to themselves that they could be a good squad.

"They've improved so much this season," Walters said. "Their goal was to maybe be a .500 team and they're better than that. They work very hard at practice every day and proved that they're a good team and won the games to show it.

There were some early jitters from the Tiger Cubs, however, as the Panthers looked to put a win on the board for their seven seniors being honored Thursday.

Trailing 7-2, Greencastle slowly settled into the match and eventually took the lead at 12-11 and seemed ready to take command after three Allison White aces in a row set the Tiger Cubs up with a 16-11 lead.

Riverton Parke offered a late push once the visitors held a 24-18 lead but a late Taylor Stoltey point finally put the set to bed.

Walters said that a lack of communication was an early hindrance to the squad's ability to play.

"At first, we didn't play very well," Walters said. "We didn't talk at all and the passing was not there. Once we got our passing down, we set up our hitters and started putting the ball away.

"Once they started talking to each other and set the middle hitters, the game completely changed."

A quick start to the second set by the Tiger Cubs was answered in kind by the Panthers, leaving the squads tied at 7-7. Four straight points allowed Greencastle to create a gap that did not move until the final few points, allowing the visitors to enhance their second-set win.

Even though it was up 2-0 in the match, Walters said the squad didn't really get going until late in the match.

"We never got enough momentum to get a big lead," Walters said. "We didn't really play our volleyball. We played well enough to beat them, but it wasn't really our style."

Finally finding a groove, Greencastle exploded past the hosts in the third set, quickly leading 9-2 and getting up as many as 13 points.

As Riverton Parke gave its seniors one last game at home, the scoreline closed slightly but the lead was far too great for Greencastle to be threatened as it closed its season on a winning note.

Jessica Lenihan and Quinci Miller each had 10 kills while Miller added four blocks. White had nine kills and nine digs to go with the three aces while Stoltey had 34 assists. Olivia Divine chipped in 10 digs and four aces in the winning effort.

Walters said that once the squad sprang into life, the squad played up to expectations.

"The third set mirrored what this team can do," Walters said. "They didn't have energy in the first two sets. If they don't play with energy, they don't do very well and they proved that they couldn't get a lead without energy.

"They had their energy in the third set and that was the reason we won by as much as we did."

Sectional play begins Thursday for Greencastle as they travel to Edgewood to take on the hosts. The Tiger Cubs suffered a harsh setback against the Mustangs earlier in the season but Walters said that the squad has more poise now than it did a month ago.

"Our hitters know where to place the ball now, something they didn't do at the beginning of the year. We've been working on putting the ball on the floor the last few weeks of practice.

"If they can do that against Edgewood and take away their big hitters with our block, we have a fighting chance against them."

Next Match: Greencastle travels to Edgewood for the opening round of IHSAA Class 3A Sectional No. 28 next Thursday, playing the hosts at 6:00 p.m.