WCC crown has Eagles 2 for 3 on list of goals 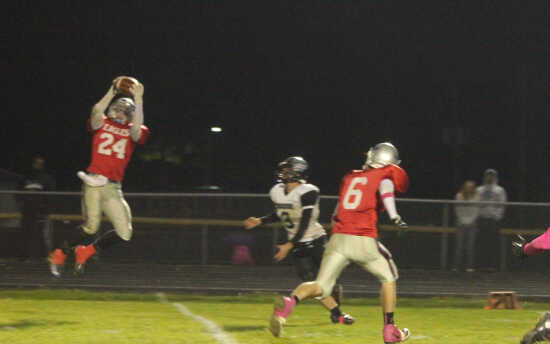 South Putnam's win at Monrovia last week clinched at least a share of the West Central Conference, the first time since 1999 the Eagles have done that.

Friday's win made this season historic.

South Putnam stomped Cascade and won the WCC outright for the second time in school history. Not even the 1986 state championship team accomplished that feat.

The Eagle's last solo conference championship was 1988, nearly a decade before most of the players on this year's squad were born.

Hacker's memory doesn't go back to when gas cost 91 cents per gallon and "Red Red Wine" was the No. 1 song in the country -- nor to when the conference was created in 1969 and included South Putnam, North Putnam, Cloverdale, Avon, Edgewood and Cascade -- but it doesn't have to for him to appreciate what his team accomplished this season.

The Eagles begin every year with three goals in mind -- winning county, winning conference and winning sectional -- head coach Troy Burgess said, and to paraphrase Duncan Campbell, nothing could make them forget.

The first goal, winning the county championship, is an unofficial title that South Putnam secured when it won three-straight against North Putnam, Cloverdale and Greencastle, last year's WCC winner and 2013 second-place team.

"This was something we looked forward to, and something we were definitely shooting for," Hacker said, "as long as everything came together, and it has."

Based on the final standings, there wasn't a single upset in the WCC this year. Each team lost all the games it played against teams ahead of it in the standings, and the best team, by margin of victory and record, sits on top.

South Putnam was the best WCC team this year, and they drove that point home by shutting out Cascade.

"This was a hard week to play," Burgess said. "Having this game to be able to clinch the conference outright was big for us this week and that was a big part of our focus."

With its top two goals crossed off, the Eagles can now focus on the third: winning their sectional.

Unlike the other benchmarks, advancing to the regional playoffs is something Burgess teams -- and many on the current roster -- have done previously.

South Putnam ripped through South Vermillion, Park Tudor and North Putnam in 2011. The team finished the regular season 7-2, but rolled into the postseason with a five-game winning streak.

This year it's up to seven and the team right now is playing the best football it has all year.

"I think it's a pretty good start for the playoffs," Hacker said. "We kind of upped the ante. We're ready to go and we've got some momentum behind us. I think we're all excited and we couldn't have asked for a better start to roll us into that."

South Putnam opens the sectional with a home game and, despite a perfect WCC record, a little unfinished business.

The conference-champion Eagles are riding high. Friday's win gave them a whole heap of zing.

Now we'll see if they can keep doing their thing.