War on leaves due to begin Oct. 28 in city 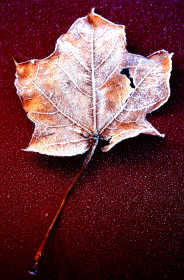 Frost can bring down its share of leaves quickly in the Greencastle area.

It happens every autumn. Just like clockwork, days grow shorter. Cooler heads (and air) prevail. And the trees turn to brilliant shades of red, yellow, gold and brown before falling leaves begin piling up on lawns and roadways.

Understandably this time every year the Greencastle Street Department's thoughts turn to those leaves. Or perhaps more accurately, getting rid of them.

And that annual leaf battle is about to begin.

"It's that time again," Public Works Director Brad Phillips told the Greencastle City Council earlier this month, announcing that city leaf-collection efforts will begin on Monday, Oct. 28 and continue through Nov. 27, which is the day before Thanksgiving.

Residents within city limits are advised to rake their leaves only to the side of the curb or into the area between the street and sidewalk.

"No limbs, branches or car parts or anything like that should be included," Phillips stressed to a chorus of chuckles from the City Council. "They won't get picked up, and will just mess up the leaf vacs."

For those locations that do not have a curb or sidewalk, Phillips advises residents to put their leaves out near the street, just not into it.

The full-blown, two-vacuum war of leaves will officially commence Monday, Oct. 28 within the city.

"As usual, we will be following the trash routes," Phillips said of the leaf-collection schedule, "so please have them (the leaves) out at least the day before because we only go through each day's route once during a week unless we are ahead of schedule."

The Department of Public Works superintendent also announced that he will attempt to run the street sweeper along behind the leaf vac on its rounds this year to make a clean sweep of any leaves and their remnants.

Simple rules of Greencastle leaf pick-up to keep in mind include:

-- No bags are to ever be used; leaves should be raked into the area between the sidewalk and curb or to the edge of the yard if there is no curb (never into the street where they can be washed into the storm sewers).

-- Never mix in any limbs or any kind of trash with leaves (tree limbs or foreign objects can damage equipment and put the leaf vac out of commission at a most inopportune time).

-- Burning leaves (or trash, for that matter) is not permissible within the City of Greencastle.

-- The collection schedule follows city trash routes as closely as possible. So if your trash is picked up on Mondays, the leaf vacuum will probably get your leaves that day as well (unless the effort gets behind because of inclement weather or mass quantities of leaves).

"We strive to notify the public of leaf pickup and any updates through the newspaper, the radio and the Internet on the City of Greencastle's website," Phillips added.

Leaf pick-up annually ends around Thanksgiving (although an extra week was added in 2012 since turkey day was at is earliest possible calendar date) so that the Public Works crews can start preparing equipment for upcoming snow-removal and city street-clearing efforts.