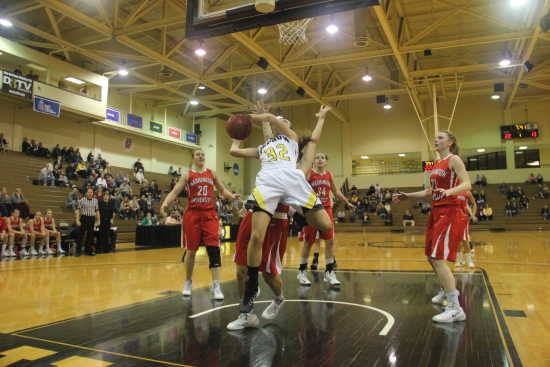 The top-ranked Tigers are starting to roar.

No. 1 DePauw beat No. 2 Washington University-St. Louis on Sunday in the championship game of the Midwest Challenge to win its 40th consecutive game and, more importantly, DPU is figuring out what it takes to be the hunted.

"It's a fun atmosphere," DPU coach Kris Huffman said. "I like how our team stepped up today and we had a better performance defensively."

Senior guard Ali Ross set the tone for the Tigers on both ends of the court. Tasked with the nearly impossible assignment of picking up the opposing point guard full court during a season when perimeter defense is increasingly challenging, Ross kept the Bears out of rhythm and was the most aggressive offensive player for DPU throughout much of the game.

Ross had 14 points, 11 in the first half, and was 3-for-4 on 3-point attempts. She also drew three fouls on drives to the basket.

"This year I feel more confident when I shoot it and I'm not thinking about it as much," Ross said. "My biggest problem last year was thinking, and I'm just kind of playing right now. ... This year, being a senior, I'm definitely trying to be a leader on the floor.

The teams went back and forth early until junior Lauren Abendroth and Ross hit back-to-back-to-back 3s to extend the Tigers' lead to 20-13. The outside shooting forced Washington coach Nancy Fahey to call two timeouts.

DPU trailed by three points early on, but never again relinquished the lead.

Ross made a layup with 3 seconds left in the half but Washington sophomore Jordan Thompson buried a runner from half court as time expired to cut the deficit to 42-30.

DePauw was 6-for-10 from outside the arc in the first half. Washington was 4-for-6.

"We got a lot of those 3 looks against their zone in the first half and we knocked a lot of those shots down," Huffman said. "We moved the ball well and the guards were in rhythm. It was a little bit more difficult in the second half getting those types of looks."

Junior forward Melissa Gilkey, a preseason all-American for the Bears, was just 1-of-7 from the field with two rebounds in the first half.

Gilkey, 6-1, was part of a Washington frontline that dwarfed the undersized DPU forwards. The Bears starters averaged nearly 5-11 and the Tigers just under 5-9.

"They have a huge post game and they have huge post players and we're a little small in the post," DPU senior Alex Gasaway said. "Defensively, we're always trying to just not let them catch because they can't shoot the ball if they don't catch."

Gasaway, an all-American for DPU last season, battled Gilkey to a draw with six points and three rebounds each, though Gilkey made just 3-14 shots.

Alison Stephens, who defended Gilkey most of the game, had two points and seven rebounds. The Bears made just 14-of-30 shots near the basket. The Tigers were 13-of-22.

"Everyone is going to try to take advantage of us in the post, so we need to make strides," Huffman said. "We need to do a better job of boxing on, (playing) post defense and pressure on the perimeter.

"... It's things that we've been trying to recognize and work on, but now they can see it."

Washington closed the DPU lead to six with 6:56 remaining when junior Savannah Trees took over for the Tigers. Trees had nine of the next 12 points in the game and finished with 17 and three assists.

Junior Emma Ondik, who had 15 points in Saturday's win over Illinois College, had 11 points and a team-high five assists.

DePauw maintained control, working the clock down in the final few minutes and pulling in a pair of offensive rebounds to keep possessions alive. For the game DPU had a 36-33 rebound advantage, though they allowed 12 offensive rebounds and 13 second chance points.

Huffman said the team is pleased to get a win, but they aren't yet ready to put much stake in the national rankings. Playing Washington is a challenge no matter what the teams are ranked.

"We'll continue to ignore the polls and try to get better," she said. "That's our motto. ... I think they have the best coach in the nation and they've got an all-American in Gilkey. They've got experience. They're sound in every facet of it."

Sunday was the 26th all-time meeting between the two Division III powerhouses. Washington now leads the series 18-8, but DePauw has won six of the last eight meetings.

"It's always fun playing against Wash U," Gasaway said. "We're pretty big rivals and we compete with each other very well. It's good matchups and two very fundamental teams.

"... It's fun to play them because they have such a great program and they always have really good teams. They expose our weaknesses, which is only going to make us better. It's nice to come away with a win rather than a loss."