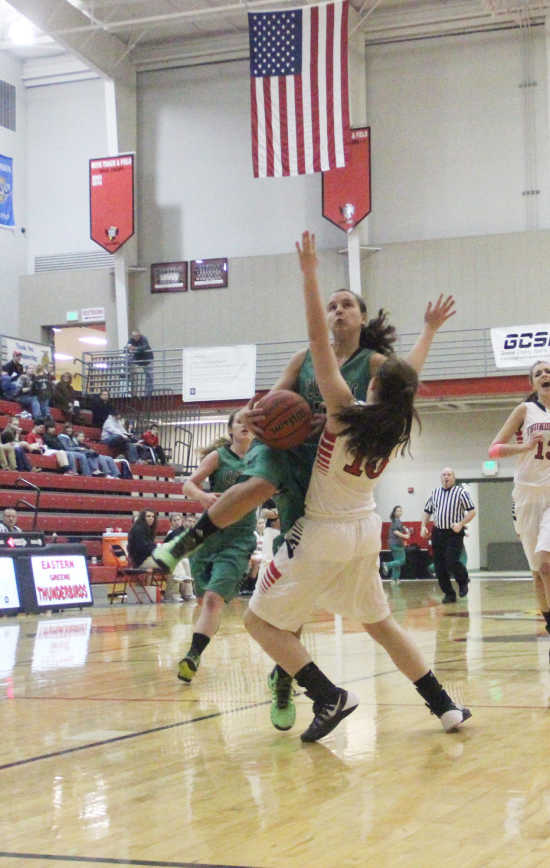 Cloverdale's Payton Dorsett drives aggressively to the basket during a game earlier this season. Dorsett had six points on Friday. (Banner Graphic/GRANT WIEMAN)

With both teams flying up and down the court for much of the game, the Bulldog's ability to change gears into a powerhouse unit proved to be a phase the Clovers could not find an answer to in a 79-39 loss.

Cloverdale head coach Matthew Langdon said the inability to match the hosts in the physical side of the game had far reaching consequences.

"We didn't adjust to the game very well," Langdon said. "Coming here to Monrovia meant it would be a physical game and we didn't adjust from the tip.

"We let them be more physical than us. That affected our shots and our mentality. We weren't aggressive and didn't fight against that physical play."

Monrovia's backcourt combo of Bailee Keen and Brandy Whitaker hit back-to-back 3-point shots and scored 11 combined points in a 12-0 run that put the Clovers behind 17-4.

Trailing 26-9 after one period, the Clovers kept things tight through much of the second frame. With the game being played a frantic pace, however, the Bulldogs managed to make use of their size advantage and find more economical shots to take a 46-23 lead into halftime.

Langdon said the squad could trade baskets with Monrovia in the first half but let quick scoring runs go unanswered.

"There were a couple of times where Monrovia went on runs and our energy was down," Langdon said. "We play well based on our energy. When we build each other up, we can run the floor and hit shots. We didn't do that enough tonight."

Bodies went flying early and often in the third quarter, resulting in the game meeting the only thing that could slow it down: the referee's whistle.

A total of 24 fouls were called in the third frame, leading to nine of Cloverdale's 11 third-quarter points coming from the line, including five from Bailee Stevens.

Langdon said the change helped the squad but still wanted to see a quicker response.

"Things changed in the second half and we got to the free throw line a lot," Langdon said. "We still needed to adjust faster to the things happening in the game.

The Clovers could not cut into Monrovia's lead, however, and the game fully ran away from the visitors after Bulldog center Raven Delph blocked three shots in four possessions, leading to both teams bringing on a plethora of new faces.

The night was a long one on offense for Cloverdale, who were 10-57 from the floor and committed 29 turnovers.

At the same time, as Langdon noted, the Clover defense forced plenty of turnovers and did a solid job of frustrating Monrovia as well.

"One positive thing tonight was that our defensive pressure did well against a good team," Langdon said. "We forced a lot of turnovers tonight. We did well with the trap and the press and that's going to help us in the future."

Langdon added that the holiday break gives the squad a chance to take a breather and continue making strides heading into their first games of 2014 at the Clinton Prairie Tournament on Friday, Jan. 3.

"We can grow from here," Langdon said. "We've got a nice break until the Clinton Prairie tournament on Jan. 3, so there's time to build off of the positives from tonight to try and have some better performances."

Next Game: Cloverdale participates in the Clinton Prairie Tournament against Eastern (Greentown) on January 4.