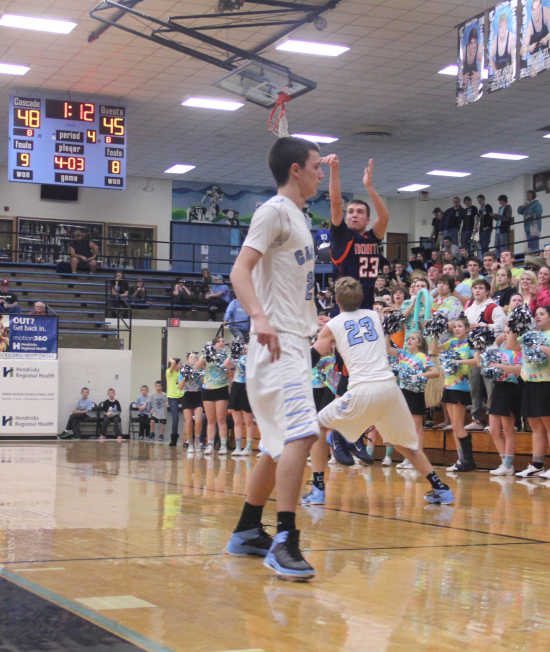 North Putnam senior Jordan Nauert pulls up for a contested 3-pointer against Cascade on Friday. His shot tied the game and helped the Cougars win. (Banner Graphic/GRANT WIEMAN)

CLAYTON -- Senior Jordan Nauert hit a game-tying 3-pointer with 1:15 remaining and put the North Putnam boys' basketball team ahead with a pair of late free throws to push his team past host Cascade on Friday 50-48.

The Cougars (3-2, 1-0 West Central Conference) led most of the way but had to rely on clutch defense down the stretch to start the WCC with a win against the Cadets (2-4, 2-1 WCC).

"It was a well-fought game," North Putnam coach Lukas Haworth said. "We knew they were 2-0 in the conference. We couldn't afford to let them go 3-0 and start off with a loss.

"You want to beat every team but there's obviously a little added motivation when you know it's a chance to stay undefeated in the conference."

The Cougars led by four at halftime and by five at the start of the fourth but sophomore Brock Stephenson tied it at 41-all with three minutes left.

Junior Michael Roberts extended the Cougars' lead back up to four after a layup and a pair of free throws, but Stephenson tied it again at 45 with another jumper.

Cascade forced a turnover with 1:26 remaining and sophomore Zac Butler took the ball straight to the basket on a fast break try.

North Putnam senior Bennett Hazelgrove appeared to have position under the basket, but he was called for a blocking foul. Butler hit the layup and free throw to put the Cadets up three.

After the inbound, North Putnam called for "Bulldog," a play designed for either the ball handler to drive to the basket or kick it out to Nauert on the wing.

"It gets us a layup or a 3 it seems like every time," Haworth said. "I was hoping that Jordan would be the one open because we were down by three, but if we would have gotten a layup there I would have been just as fine with it.

"To the credit of both Bennett who passed it and Jordan who hit it, they just ran the play to perfection, knocked it down and whatever momentum Cascade had we were able to get right back."

Nauert caught the ball on the left wing, several feet beyond the 3-point arc, pulled up instinctively and buried the tying shot with 1:15 left.

Cascade worked the clock down and missed a shot with 30 seconds remaining. North Putnam junior Brandon Hall secured the rebound for the Cougars and, after a timeout, they advanced the ball.

The Cadets kept their half court pressure on and forced a dangerous cross-court pass toward Roberts. He reached for the ball and was met with a collision. Cascade senior Hayden Suter was called for the foul, putting Roberts at the line with a tie game and 22 seconds left.

He missed both free throws.

"(The officials) had just called a foul on Bennett in the lane to put (Cascade) on the line and they did a good job of staying consistent in the game," Haworth said.

Nauert got a steal on the next possession, drew a foul and went one-for-two at the line. The next possession, North Putnam got another steal, Nauert went back to the line and again split the pair, this time with just 8 seconds remaining.

"I promise we do practice our free throws," Haworth said. "That's the loudest crowd we've had to face all year so we might have to start pumping in some noise when we're shooting them in practice to simulate that a little bit.

"Luckily the defense was there to back up the missed free throws and turnovers."

Cascade sophomore Austin Gates had a shot to tie the game but it rimmed out with less than a second remaining. Nauert secured the rebound for the Cougars to put his team into second-place early in the WCC schedule.

Hall had nine points and five rebounds. North Putnam had 12 assists on its 14 made field goals and started the game hitting 12 of its first 15 2-point shots.

Junior Schuyler Hart had 11 points and seven rebounds for the Cadets.

"I give my guys a lot of credit for staying focused," Haworth said. "It's finals week, with Christmas break coming up. There's a lot of things that could have distracted them." 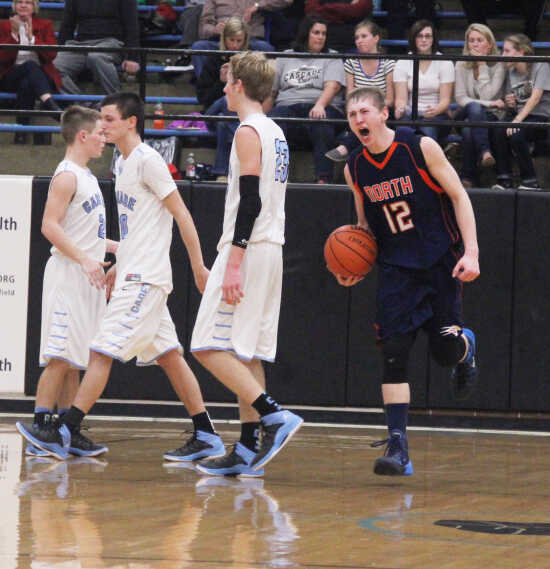