PUTNAMVILLE -- A 30-year-old Texas woman was arrested on five criminal charges New Year's Day after the car she was driving was initially stopped for reckless driving.

A 2004 Volkswagen, driven by Mary S. Owen, of Allen, Texas, was one of two vehicles stopped by Indiana State Police officers for reckless driving on eastbound Interstate 70 at 5:49 p.m. Wednesday. 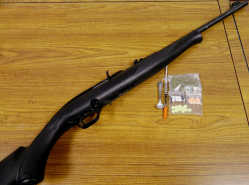 Owen, who was lodged in the Putnam County Jail, is being held on charges of:

-- Possession of methamphetamine with a firearm, a Class C felony.

-- Possession of a controlled substance, a Class D felony.

-- Possession of marijuana, a Class A misdemeanor.

Trooper Yan Dravigne noticed the two vehicles were following others too closely and stopped both vehicles for the traffic violation.

During the traffic stop, Trooper Dravigne developed information that led to him to search Owen's Volkswagen, police said.

The search revealed approximately three grams of marijuana, a syringe with methamphetamine, 23 various narcotic pain suppressant pills and numerous household items that had been reported as stolen in Texas.

The second vehicle was released after its driver was cited for reckless driving.