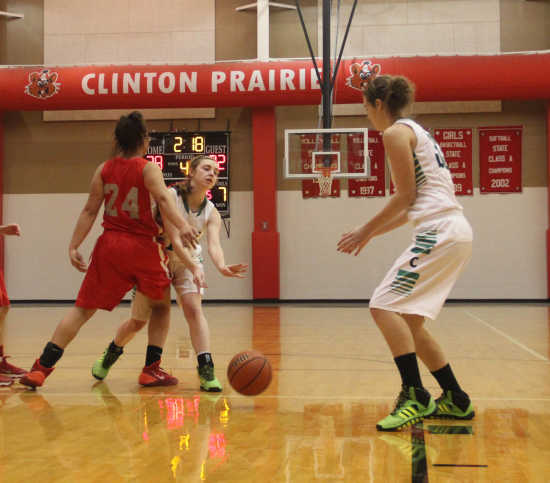 Cloverdale's Laura Worthington feeds a bounce pass to Chelsea Combs for a layup in the fourth quarter against South Newton on Friday. (Banner Graphic/GRANT WIEMAN)
Order this photo

FRANKFORT -- The Cloverdale girls' basketball team used a two-week break from games to help reconstruct its identity and flashed its new, more active philosophy to get a win against South Newton on Friday 44-24.

The Clovers (4-8, 0-2 West Central) played the Rebels in the second round of the Clinton Prairie Tournament after losing to Eastern (Greentown) in game one 52-39.

"We did well defensively the whole (second) game," Cloverdale coach Matthew Langdon said. "Overall, we got a win and we wanted to get at least a win from this tournament."

Junior guard Bailee Stevens led the Clovers in win against South Newton, tallying 16 points and nine rebounds before fouling out after the outcome was already decided in the fourth quarter.

Stevens and senior Megan Helterbrand helped Cloverdale jump out to 9-1 lead over the Rebels (5-6, 3-0 Midwest) after the first quarter and, eventually, outscore them in every frame of the game.

The Clovers were running the same defense zone they have all season, Langdon said, but after the layoff the players appeared more comfortable and aggressive in the scheme, which allowed them to increase their pressure, jump into passing lanes, force turnovers and get fast-break baskets.

"I think we're trying to figure out what type of team this wants to be," Langdon said. "We're trying to work on more accountability. Even though we play a zone for the most part, you've still got to be accountable for a person.

"... Especially in the second half we looked probably the best we have looked all year defensively, getting into passing lanes but not over-pursuing and not getting out of position."

Cloverdale forced 27 turnovers in the win against the Rebels, 11 of them coming on steals. Sophomore Kimmy Winders had four of those herself. Winders also had eight rebounds.

The Clovers took a 21-10 lead into halftime before stumbling a bit in the third quarter and allowing the Rebels their first double-digit period of the afternoon.

This was a reversal from Cloverdale's opening game against Eastern when they allowed 20 points in the second quarter before cutting into the deficit after halftime.

"We're wanting to slow the game down a little bit," Langdon said. "The goals is, each time, if we can hold (the opponent) to single digits in a quarter and we can get to double digits ourselves."

The Clovers had a much better physical matchup with South Newton, at times playing with five guards on the court without being beaten down in the post.

That wasn't the case against Eastern, which spent most of the game with five of the seven tallest players on the court.

Helterbrand finished with 10 points in the win, adding seven rebounds and two steals.

Cloverdale is next scheduled for Monday when it will host Clay City (5-8, 2-3 Southwestern Indiana) at 7:30 p.m.