Three months after a rather contentious Greencastle Board of Zoning Appeals (BZA) confrontation over a proposed tattoo studio, the issue routinely won approval in less than 20 minutes Tuesday night.

Considering a location on the southwest side of town this time, the BZA unanimously granted a special exception use variance to allow a tattoo studio in the old Barrier Windows building at 1139 S. Jackson St., a General Business 1 (GB1) zoning district.

The new business, Castle City Tattoo, will be operated by Rachael Walker, while her parents, John R. and Karen D. Helmers of Greencastle, own the building at the northeast corner of South Jackson Street and Sunset Drive.

"Everything's ready," Walker said after being granted approval. "I'd like to be open as soon as possible."

Not a single person was in the audience to question the business or its desired location Tuesday evening. That was in sharp contrast to a concerned group that attended the October BZA meeting when the matter was tabled after a question about notification of nearby property owners arose. 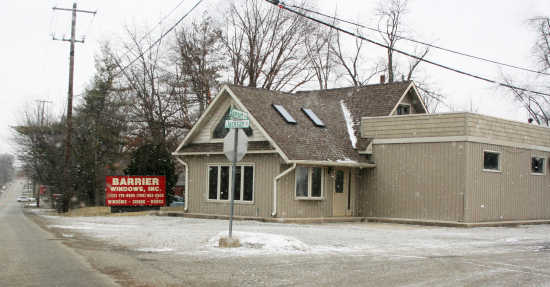 The old Barrier Windows building at 1139 S. Jackson St. (the corner of Jackson and Sunset Drive) in Greencastle won approval from the Board of Zoning Appeals Tuesday night as the location of Castle City Tattoo, a new business being opened by Rachael Walker. Banner Graphic/ERIC BERNSEE

Walker ultimately withdrew that petition concerning the westernmost space in the two-building commercial complex at 813 E. Franklin St., just north of the Dairy Castle and a stone's throw from her parents' veterinary clinic on East Washington Street.

A 2004 Greencastle High School graduate who ran a licensed tattoo business the past two years in Louisville (Indiana requires no licensing) and has been a tattoo artist for nine years overall, Walker told the BZA Tuesday night that her business plan has not changed.

She still plans to consider offering space in her building for an art gallery featuring local artists and will have self-imposed hours of noon to 8 p.m. Tuesday through Saturday.

While BZA member Scott Davis suggested one stipulation for approval be to prohibit racist or gang-related images, City Attorney Laurie Hardwick noted that such a demand would be a violation of freedom of expression.

Walker agreed with Davis' disdain for that kind of ink, however, and said she would police the issue herself by refusing to do any such tattoo.

Stipulations that will accompany the special exception approval are that all tattoo customers be age 18 or older and that specified hours be observed and no new appointments begin after 8 p.m.

Additionally, no body piercings will be done on-site and no related merchandise will be sold on the premises.

Attorney Hardwick also reported that the city received no calls or letters against the South Jackson Street location.

City Planner Shannon Norman noted in a written report that while residences exist north and east of the property, the site "has been an established commercial property for many years with outside storage and frequent service traffic."

BZA member Wayne Lewis made the motion to approve the request with Davis and John Phillips, who chaired the meeting in the absence of President Donnie Watson Tuesday night, also voting in favor.

A tattoo studio, along with several other commercial enterprises and even entities like schools and churches, is considered an allowable use of business-zoned property within the city. However, such proposals are reviewed on a case-by-case (i.e., special exception) basis.

The next regular session of the Greencastle BZA is set for 6 p.m. Tuesday, Feb. 4 at City Hall.