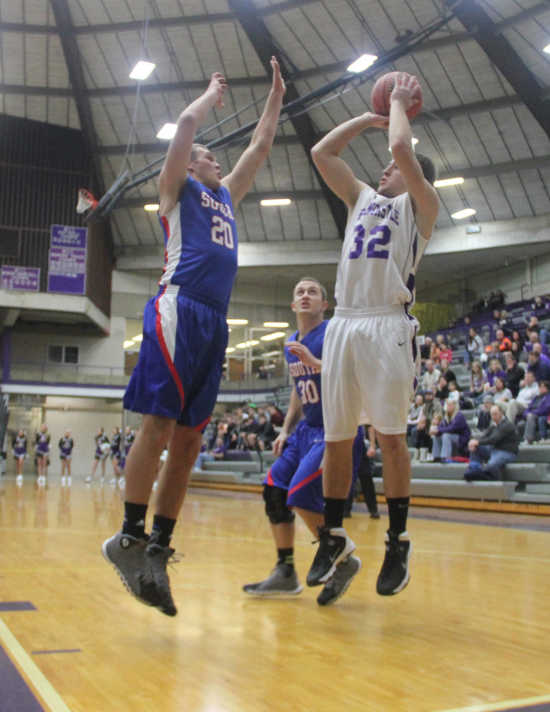 Greencastle sophomore Brody Bollman, seen here in a game early in the season, made a number of key plays for the Tiger Cubs down the stretch in a back-and-forth affair with Edgewood on Saturday. (Banner Graphic/GRANT WIEMAN)

On the second night of a back-to-back in which Greencastle won its first, the Tiger Cubs hosted the tall Edgewood Mustangs. With late heroics, the Mustangs won Saturday, 54-52.

GHS (4-4, 1-1 West Central) won the night before, stealing the pride in South Putnam's homecoming. They came in looking to make it two nights in a row.

The game came down to the end, but the Tiger Cubs were unable to hold off the Mustangs, who made a last second layup to win by two.

Edgewood (4-7, 0-2 Western Indiana) is a tall team. Four players were taller than the tallest for Greencastle.

The height proved to be a killer as the rebounds kept piling up for the Mustangs and it kept GHS from getting points.

"Rebounds have been something we've struggled with all year," GHS coach Troy Greenlee said. "In my opinion its all about getting position. We have to do better on the glass at both ends."

Even though the rebounding for Greencastle was subpar they jumped out to a 17-4 lead in the first quarter. Sophomore Ryan Coble scored nine of those points. Coble had 24 on the night with six threes and six rebounds.

"(Coble) is a kid we've looked toward," Greenlee said, "He opened up the inside for us and made some perimeter shots. He's one of the guys we count on."

The run was answered by Edgewood, as they stiffened up in the second quarter. They pressured GHS and forced them to turn the ball over.

The Mustangs made a few baskets and made it to the break only down two.

GHS looked like it had lost momentum, and the rebound deficit was killing them. Mustang junior Jonas Carmichael, a 6-foot-7-inch center, had no problems getting on the offensive glass. Luckily for the Tiger Cubs he was only 2-for-8 from the floor.

Coming into the second half, the momentum still favored the Mustangs. Senior Clayton Settle made two quick threes and eventually made it a five-point lead.

Greenlee had to take a timeout to get his team back on track.

The Tiger Cubs came out of the timeout with urgency and quickly got back in the game. Coble hit two more three-pointers and got the crowd back into it.

The Tiger Cubs were down one going into the fourth but with the favor being on their side.

GHS junior Brody Bollman was quiet to this point. He had drawn two quick fouls in the first quarter and had to sit most of the half. He came out in the second half and picked up his third with only two minutes gone by.

The fourth quarter was time to step up and he did. With 6:29 left he got a huge steal at half-court and took it in for an easy layup to put the Tiger Cubs back up.

Although Bollman had four turnovers in the last five minutes with one being especially costly, he kept driving with authority and went to the foul line four times where he made 6-of-7. He also had two assists.

GHS looked like it was about to pull away and make it final, but Edgewood had one more run.

With less than three minutes left and Greencastle up by five, the Mustangs started driving the ball and kicking it out for threes. They made two and Greencastle did not help the cause by fouling them when they were in the double bonus.

EHS shot six free throws in the final minutes and made five. The final free throw attempts put the Mustangs up by 1.

It was then Greencastle's turn with the ball and Bollman was fouled with 52 seconds left. Bollman made the first and missed his only free throw of the game on the second try.

With the score tied, Edgewood drove down the court, Edgewood senior Connor Coulier threw the ball away with just over 26 seconds left.

Following a timeout, Greencastle inbounded to Bollman and instead of the Mustang defense backing off, they played like they were down and stripped the ball. Following a timeout of their own, the set up their final play.

Holding the ball until the final seconds, Mustang junior Ryan Newman broke down the Tiger Cub defense and made it to the rim, where he made an easy layup for the win with no time left on the clock.

"I don't know if luck has anything to do with or if it's just execution. We had our chances to make plays and we just couldn't do it," Greenlee said.

Greenlee said he thought the effort was great. He challenged his guys to compete and they did so. Having made the plays down the stretch Friday at South Putnam, Saturday's game went the other way.

Greencastle will try and come back from this loss when they host conference rival Cascade at 7 p.m. Friday.