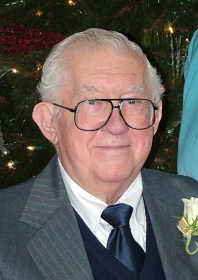 He was a U.S. Army veteran of the Korean War.

He received his B.A. degree from Indiana State University and his master's from DePauw University.

He was a member of the Long Branch Church of Christ.

After being discharged from the Army, he was a salesman and businessman before turning to teaching.

He taught industrial arts for many years at Beech Grove, Avon and Plainfield high schools.

He later taught science at Turkey Run and IPS before retiring in 1997.

He served as a minister at the Long Branch Church of Christ for 45 years.

Funeral services will be conducted at 1 p.m. on Monday, Feb. 3, 2014 in the Hampton-Gentry Funeral Home, Plainfield, where friends may call on Sunday, Feb. 2 from 2-5 p.m. Burial will be in Maple Hill Cemetery, Plainfield

Online condolences may be sent to the Johnson family at www.hamptongentry.com