February picking right up where snowy January left off

With the second snowiest January on record still way too fresh in our collective memory, Putnam County and most of Indiana stand poised to endure another round of snow and cold.

The National Weather Service has issued a Winter Storm Warning, in place now until 1 p.m. Wednesday for most of central Indiana, including all of Putnam County. 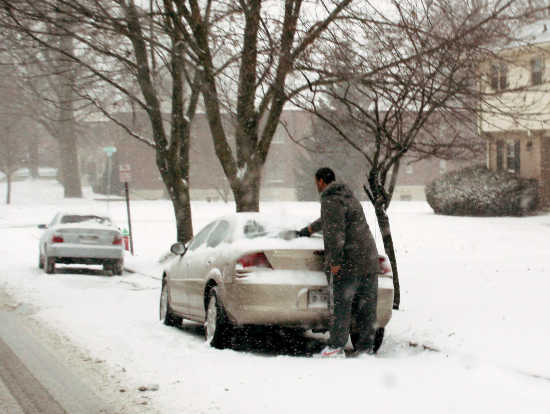 Scenes like this were typical of January in Greencastle and Putnam County as 25 inches of snow were recorded locally, making it the second-snowiest January and overall the fourth-snowiest month on record in central Indiana.

Snow accumulations of 5-8 inches are being predicted along and north of a line north of Interstate 70 from Terre Haute to Connersville, with 2-5 inches expected south of that area. North of Indianapolis -- where no mixed precipitation is expected -- snowfall totals may range from 7-10 inches.

Snow, sleet and freezing rain are expected to continue through Wednesday morning.

Officially for the month of January in Putnam County, 25 inches of snow was recorded by local weather observer Diana Foust, who also noted three other days on which a trace of snow was apparent.

Meanwhile, the January total recorded at the Indianapolis Airport was 26.7 inches. Thus January 2014 trails only the blizzard-enhanced January 1978 at 30.6 inches on the all-time list of snowiest Januarys.

An average January in central Indiana sees 8.8 inches of snowfall, making it was likeliest month for white stuff. December regularly averages 6.9 inches, while February usually gets 6.5 inches of snow and March musters an average of 2.6 inches.

The Jan. 5 winter storm was the biggest of the month with locations along and north of Interstate 70 receiving 8-14 inches of snow, including 12 inches at Greencastle. At Indianapolis, the 11.4 inches on the fifth was the second highest daily total in recorded history, behind only the 12.1 inches on March 19, 1906 (it should be noted that the blizzard of 1978 totals were split over two days).

When snow wasn't flying in January, the cold and wind were making their presence known. Local observer Foust reported a low January temperature of -12.8 degree on Jan. 7 with a high of 50.7 degrees (everybody sigh) on Jan. 13.

Overall seven days of below-zero temperatures were recorded for the month.

The National Weather Service (NWS) blames the coldest January in more than 30 years on an upper-level weather pattern highlighted by a broad ridge of high pressure in the western part of the country, and a trough of low pressure east of The Rockies.

That combination enabled "repeated blasts of air from the arctic and polar regions to move into the eastern part of the country," the NWS added.

At Indianapolis, eight days with above-normal average temperatures were reported with 23 days of below-normal average readings. January 2014 was tied for the 11th coldest in the Indianapolis area since weather records began in 1871.

And whether you believe in the prognostication prowess of the groundhog, a polar penguin or the Old Farmer's Almanac, February 2014 seems to be picking up where January left off.

The official outlook for February 2014 from the Climate Prediction Center indicates a much greater chance of below-normal temperatures across much of central Indiana. At Indianapolis, the average temperature for the month is 32.1 degrees.

And not surprisingly, the outlook also calls for a much greater chance of above-normal precipitation. The average precipitation for February at Indianapolis is 2.32 inches, with 6.5 inches of snowfall.