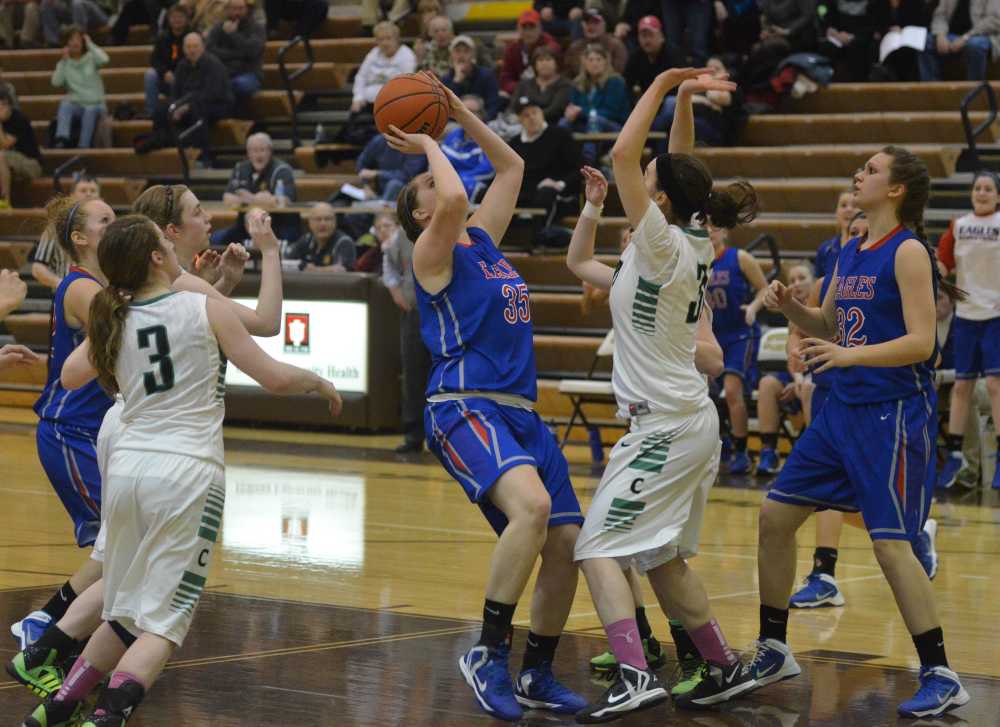 SPEEDWAY -- Two weeks ago, South Putnam nearly eliminated a 21-point fourth quarter deficit at Cloverdale, getting as close as three points before the hosts finished off their last win of the regular season.

The girls' sectional opener Wednesday night at Speedway High School between the two squads played like a continuation of that furious final frame.

Down 12 midway through the third quarter, the Eagles slowly chipped away at the lead, forced overtime on a last-second put back by Amanda Barnes and finally secured a 36-34 win over the Clovers.

South Putnam coach Bill Merkel said that after the squad got through the rough parts, they grew in confidence as the game wore on.

"I thought our defensive effort was probably the best we've had all year," Merkel said. "Offensively, I think we tried to do too much early in the game and didn't let the game come to us.

"As soon as we relaxed and realized we had a shot to win the game, we went back to what we were supposed to be doing."

Cloverdale coach Matthew Langdon said that only seeing the score of the three games between the squads would do a disservice to the effort put in by the Clovers.

"It would be easy to look at the results of the first two games against South Putnam and think that maybe we didn't play hard," Langdon said. "That wasn't the case.

"Our defense fought all night long and that kept us in the game. We did exactly what we wanted to do on the defensive end. Coach Merkel did a good job preparing his girls for the press.

"We didn't get as many steals and layups but the girls did a good job of reacting to them breaking the press and not giving up layups," Langdon added. "We just couldn't knock down a shot."

Much like in the contest two weeks ago, Cloverdale came out swinging and built up a quick 12-3 lead midway through the first quarter.

But as quick as the offense had been in the opening six minutes of play, everything came to a screeching halt for the next eight minutes.

Had South Putnam guard Olivia Arnold not hit a three-pointer with 1:10 left in the half, neither team would have scored in the second period, meaning the Clovers left with a 12-6 halftime lead.

Merkel said that getting that basket was important coming out of halftime.

"Any shot that would have went in would give us a big lift, which it did," Merkel said. "We knew that they were going to come out early and hit some shots on us and we had to have confidence tonight.

"If we could hang with them, we thought we could outplay them in the second half and that's what we did. When we made a shot or two, we got into our press. We stood them up and then converted on the other end. Things kept snowballing from there for us."

Langdon added that even though his team was shut out in the second quarter, the Clover defense had proven just as stout in the first half.

"We went in and talked about the positives," Langdon said. "I thought we were playing championship defense to hold them to six points in a half. We were doing everything we could defensively, we just had to be patient on offense."

Cloverdale doubled its lead to start the second half, scoring the opening six points to take an 18-6 lead.

Emily Dobson finally got the Eagles on the board by scoring the next five points, helping to spark a 10-1 run to end the quarter that left South Putnam trailing 19-16.

Bailee Stevens tried to push the Clovers over the line, scoring all eight points Cloverdale accumulated during the fourth quarter.

But with each basket, the momentum began to shift more and more into South Putnam's corner and with increasingly quick substitutions, the Eagles began to ratchet up the pressure on Cloverdale.

Jessica Modglin finally tied the game at 25 apiece with 1:44 left in the quarter and South Putnam thought it had regained possession after a Clover miss, only for Aubrey Nichols to get called for an offensive foul.

Cloverdale made the second chance count when Stevens took a feed from Peyton Dorsett and put the Clovers ahead 27-25.

South Putnam missed on the return trip and the Clovers were able to whittle 40 seconds off the clock before Dorsett was fouled.

The sophomore guard missed the front end of the one-and-one, giving the Eagles one more chance to tie the game.

Barnes got two cracks at the basket and made the second attempt count as the senior center got the ball to fall as time expired to send the game into overtime.

Having been unable to secure the win in regulation, Langdon said Cloverdale actually relaxed as the overtime period began.

"Considering we were up early and we were missing shots, we weren't disappointed to be tied or heading into overtime," Langdon said. "We talked to them at the end of regulation and told them that this was an overtime sectional game and they should be having fun."

The Clovers' Laura Worthington opened the scoring in overtime with a short jumper that was answered by a three from Kaitlyn Lady that gave South Putnam its first lead of the game at 30-29.

Dorsett tied the game with 1:14 left with a free throw before the defining moment of the game came for South Putnam.

Dobson was fouled and hit her first free throw but missed the second. Ariel Higgins snared the offensive rebound and an assist after she offloaded to Katie Hewitt and the sophomore buried a massive jumper to give the Eagles a 35-32 lead.

Merkel said it was a risky shot but one that Hewitt took without hesitation.

"We made free throws in the end but Katie hit a huge basket for us," Merkel said. "I wasn't sure whether or not she should have taken it but she drilled it. She had the confidence to turn around and fire it in the hole."

Stevens hit a pair of free throws on the return trip and there looked to be another chance available when Nichols missed the front end of her one-and-one opportunity.

Worthington got free underneath the basket but her shot went short and Dobson was sent to the line after grabbing the loose ball.

Dobson only hit one free throw but the bounce off the rebound did not come down for Cloverdale and time expired before Dorsett could get a shot away, sending South Putnam on to the sectional semifinal.

Langdon said the squad was disappointed with the shooting effort but never gave up on the game.

"You've got to knock down a few to pull the defense out and make room on the inside," Langdon said. "We shot a lot of threes but it was a bad shooting night.

"We didn't take bad shots but the girls could not get one to fall. Even then, we continued to fight all night on the defense and I'm proud of them."

With the season finished, Langdon said that the Clovers, which will only lose two seniors, needed to be ready for the same situation to crop up again next year.

"We showed improvement this year," Langdon said. "When you lose all five starters from the previous year, there's a thought that they might not have any confidence or they're not going to want to work. This group came in and worked hard.

"We talked to them about the importance of not thinking they were better because they were a year older. We need to put in time during the offseason so that when these girls come back as seniors, juniors and sophomores, they've improved their game because of hard work and not time."

South Putnam, meanwhile, will return on Friday to Speedway to take on Covenant Christian, which defeated the Eagles 75-29 in November and knocked off the sectional host Sparkplugs 68-63 in the late game.

Merkel said the Eagles were going to have to be ready to perform many of the same things they had done against Cloverdale on a much more consistent basis.

"Covenant Christian is probably the best team we've played all season," Merkel said. "They're a very up-and-coming program. We've got to be able to handle their quickness and not try to drive through it. We've got to pass the ball and move it faster than they can.

"We've also got to handle their pressure. If we can do that and apply some pressure of our own, get a score or two and hang in there, we might have an opportunity to get them.

"It's the sectional and they're in the same bind we are. If they slip up, they're gone and if we slip up, we're gone."