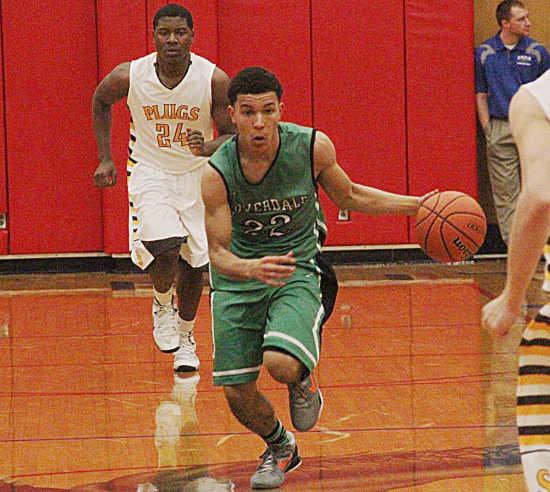 It was a win or go home situation for both the Cloverdale Clovers and the Speedway Sparkplugs Wednesday night. The second night of sectional 44 at South Putnam tipped off with two dominant teams.

"Transition is a big part of their game," Clover coach Pat Rady said. "When they got in transition they would obviously cause some problems."

The first half started out with Speedway getting out to a fast start. They were up 4-3 before making an 8-0 run.

"They're a good ball club," Rady said. "Tonight was their night."

Cloverdale came back with a surge on the work of freshman phenom Cooper Neese. He scored 12 first-half points to take the Clovers in only down three at the half.

"I think he is a great ball player," Rady said. "Under the situation I thought he played well."

Cloverdale got out to a good start in the third and cut the lead to two, but Speedway responded with run that put them up 10.

Clover junior Brantson Scott hit an inside shot to cut it to eight, but the Sparkplugs went on another run to make it a 15-point lead.

"It was not the same game as it was in the first half," Rady said.

The fourth quarter has been the big quarter for Cloverdale most of the season. It was Wednesday night as well but being down 15 to start the quarter put a tough burden on the defense.

Neese hit two threes in the quarter along with junior Marquise Moore's only three of the night. Cloverdale was able to get some stops, but the Speedway offense was too strong.

Sparkplug junior Anthony Jones and senior Jordan Furlow, two possible Division I college recruits, made athletic moves to the basket where they scored 15 and 13 combining for six assists. The Clovers had no stop for those two.

The contributions from Jones and Furlow led their team to the victory. They were outscored by six in the final quarter, but it was not enough.

"They won on the scoreboard," Rady said. "I guess they are the best team."

Cloverdale had a spectacular season, finishing with 19 wins and the Putnam County title. They also won the West Central outright for the first time since the 1980s.

"We can't let this game ruin our season," Rady said. "We played really well this season. We did a lot of good things, but it is always hard to see the seniors go."

Cloverdale's season is over, but the program has a lot to look forward to. Three of the five starters will be returning next year, with seniors Kade Schroer and Kedrick Collett departing.

The Clovers are a youthful team and they have a lot to build on. With a year's work, they should still be a sectional contender next year.

"If they work in the offseason they have a lot of potential," Rady said. "They can be very good. Any setback you have in life is determined by what you do later on. Today is over. We have to move on. It's tomorrow now. Yes, we would love to practice tomorrow, but today is over."

Speedway will take on North Putnam Friday night at 7:30 p.m. in the second round of sectional 44 at South Putnam.