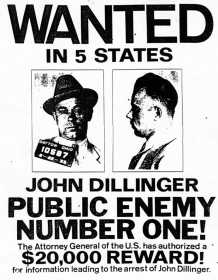 AUBURN -- The FBI Thursday returned a .45-caliber Thompson submachine gun to a northeastern Indiana police department more than 80 years after it was stolen by members of John Dillinger's gang.

Three FBI special agents from Indiana presented the weapon to Mayor Norm Yoder during a ceremony Thursday at the DeKalb County Courthouse.

The submachine gun was stolen on Oct. 14, 1933 -- just nine days before the Dillinger gang's most lucrative robbery ever at Central National Bank on the courthouse square in Greencastle when the Public Enemy No. 1 and his crew got $75,000 in cash and negotiable bonds..

The gun was taken from Auburn along with bulletproof vests, ammunition and several other firearms, likely used in the Greencastle heist and others that followed.

The gun was later recovered by the Tucson Police Department in Arizona and turned over to the FBI.

Auburn Police Chief Martin McCoy said the department is making plans to preserve and display the gun in Auburn. The city is reportedly in discussions with the Auburn Cord Duesenberg Museum about possibly putting the gun on display there.

Dillinger's gang obtained the historic weapon by walking into the Auburn police headquarters and locking up the only officer on duty -- Sgt. Fred Kreuger.

The gun arrived in Auburn just before noon Thursday, steeped in local legend and carrying an estimated value of $50,000 to $1 million.

The gun was formally presented to the city by FBI Special Agent Robert Allen Jones of Indianapolis, returning it to what he called "the rightful owner."

The story behind the gun is that Dillinger, who was being held in jail in Lima, Ohio, was freed by three members of his gang, who in the process of freeing him, killed the sheriff.

Two days later they went to Auburn, where Dillinger and two other gang members locked up the officer and took hundreds of rounds of ammunition and several guns.

A week later they also robbed the Peru police station of a number of guns, including two more Thompson submachine guns, which remain unaccounted for. 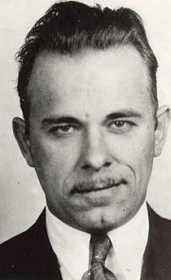 Auburn's gun was almost certainly used by Dillinger himself in shootouts with police, Jones said.

The gun was recovered after Dillinger and his gang, who had taken refuge in Tucson, Ariz., had to flee from a fire in the hotel where they were staying. They bribed two firemen to go into the hotel and recover their luggage, which contained nearly $24,000 in cash and a small arsenal. Later, the firefighters recognized the gang from an article in True Detective magazine, and Dillinger and others were captured.

Dillinger eventually got away but the submachine gun remained with Tucson police until 1966, when it was presented to FBI Director J. Edgar Hoover, who put it on display at agency headquarters.

About 20 years ago, a retired Auburn police officer and history buff started investigating the whereabouts of the gun. The city still had the purchase order for the weapon and its serial number.

In 2010 a caller who wanted to remain anonymous gave McCoy the serial number of the gun on display at the FBI headquarters, and police in Auburn realized it matched their records.

Still, it took four years for the gun to come back home.