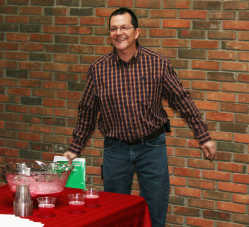 Retiring Greencastle Assistant Fire Chief Jeff Mace smiles as he receives a round of applause during his retirement open house Thursday afternoon at City Hall.

When someone retires, it's seldom good news to hear his next stop will be the hospital.

But for departing Greencastle Fire Department Assistant Chief Jeff Mace, that represents both an end and a new beginning in his professional career.

Mace, who has served as assistant chief to GFD Chief Bill Newgent the past 14 years, worked his final shift as a firefighter this past week, getting off at 7 a.m. Thursday, just hours before being feted at City Hall with a reception attended by some 50 co-workers and well-wishers.

His new career has already begun at Putnam County Hospital, where the 52-year-old Mace has been serving as director of plant operations the past six months.

"'Retirement' and 'hospital' ... you usually don't want to hear that in the same sentence," he laughed while greeting friends, family and fellow firefighters.

"It's a huge job," Mace said of his PCH position, "but I love it. I've learned a lot and I'm using my building background and my fire science background."

Newgent recalled how he first met Mace when the fire station was getting new windows, being installed by Mace Brothers Construction. Jeff Mace was working for his brother Jack at the time but the visit to GFD seemed "to spark an interest" in firefighting, Chief Newgent noted.

"It hurt me when he left," brother Jack said Thursday, "but he had this thing about fire that he loved."

Jeff was consumed by the idea of being a firefighter, "almost to annoyance," his older brother told the open house gathering. "I'm sure it with be the same with his new job."

Mace first joined GFD as a volunteer and became a regular upon the retirement of Dave Varvel. 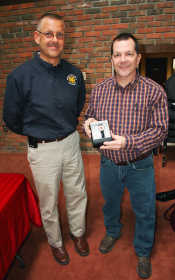 Retiring Greencastle Assistant Fire Chief Jeff Mace (right) shows off the watch he was presented by Fire Chief Bill Newgent during his retirement open house Thursday afternoon at City Hall. It is a GFD tradition for fellow firefighters to pitch in to buy a watch for their retiring brethren.

Mace was all smiles as his cohorts told stories and praised his 20-year career. When it was his turn to talk, he stood alongside wife Tracy and eagerly reciprocated.

"It's been a great 20 years," he said. "It's almost surreal. It doesn't feel like I should be retiring."

Mayor Sue Murray thanked Mace for his service to the city, noting that she learned only Thursday that Mace had never been a husband or a father without being a firefighter at the same time.

"It's been an honor to serve the people of Greencastle and the township," Mace said. "I've been really, really fortunate to have a job like this and be paid for it."

In thanking and praising Chief Newgent, Mace stressed that local residents should take pride in knowing the Greencastle department tirelessly trains and provides such professional service.

"Citizens should really know what a great fire department we have," he said. "Training is taken very seriously. We're training all the time. Our citizens are getting a bang for their buck, they really are, and I'm proud of that."

He called his opportunity as assistant chief, until now the only No. 2 man Newgent has had during his tenure, "an awesome opportunity."

"And riding in that fire truck, blowing that horn," Mace smiled, "I'm not going to kid you -- it's fun!

"It's been quite a ride," he added before getting a hug and kiss from wife Tracy and a round of applause from everyone else. "I'm going to look back on this time forever."