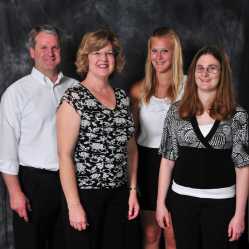 Dean Gambill (left), wife Anita, and daughters Michaela and Kaylee (right) are excited for "Wheel of Fortune," Anita passed auditions be a contestant on the show in July. She will be in California this week for filming.

After attending auditions under a metal roof on a rainy day in Terre Haute in July, one lucky member of the Gambill family was selected to be a contestant on "Wheel of Fortune."

Kaylee is obsessed with "Wheel of Fortune" and when she heard about auditions, she insisted on going. Anita accompanied her to the first round and figured that since she was there anyway, she might as well audition too.

Now, with just two weeks notice from the studio, Anita has headed to California this week for filming. The family was invited to attend but due to extensive travel in the near future for the girls, and attending to father duties for Dean, only Anita will be making the several day trip to warmer climes in Culver City, Calif.

Anita has spent the last several weeks studying and preparing for the show, even if a gentle "Mom, it's almost 7 o'clock it's time to practice!" from Kaylee could be heard within the house.

The episode(s) will air between the end of April and mid-May.