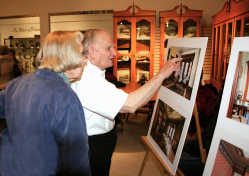 Checking out interior photos of the John Ireland House at 429 E. Anderson St., Greencastle, Jim McMillan, who lived in the house for 17 years, discusses the famed woodwork with Ellie Ypma following the annual meeting of the Heritage Preservation Society of Putnam County Wednesday night at the Putnam County Museum.
Order this photo

DePauw University has left no stone unturned in the renovation of the historic John Ireland House, the 1887 Italianate home at 429 E. Anderson St, Greencastle.

It also wiped the slate roof clean, rewired the entire abode and ran new plumbing throughout the impressive structure that lies along the north side of DePauw's new campus entrance.

But perhaps the most remarkable part of the six-figure restoration effort, Tony Robertson of DePauw Facilities Management told members of the Heritage Preservation Society (HPS) of Putnam County Wednesday night, is that each and every brick in the two-story home was taken down, its mortar removed and the house totally tuckpointed.

Robertson detailed the Ireland House restoration, inside and out, as the HPS conducted its annual meeting at the Putnam County Museum.

None of it would have happened, Robertson said, if not for the City of Greencastle receiving the Stellar Grant in 2011 and leveraging DePauw funds dedicated to the Anderson Street project as a major portion of the overall matching money.

"I'm not sure in the 32 years I've worked at DePauw that I have seen anything make so dramatic a change as the Anderson Street project has done," he said, adding that particularly in the fall and with winter's first snowfall there "is not a more beautiful setting" anywhere on a college campus.

The idea of renovating the Ireland home as a guest house for visiting university faculty, artists or speakers evolved about a year ago this time when DePauw Board of Trustees member Jane Emison made a $1 million gift to renovate three Anderson Street properties and create the Emison University Residences.

Robertson said knowledge that the Ireland House was a major contributing factor to the city's Eastern Enlargement being declared a Historic District spurred DePauw officials to "take particular steps" in maintaining its historic integrity.

"It became apparent," he said, "that we would have to do more than originally planned."

The goal was to put the house back as "close to 1880 standards as possible," Robertson said, noting that state historians even inspected the mortar joints to make sure everything was being done properly.

On the exterior, DePauw took down one chimney that was not original to the structure but had to replace the shutters that literally fell apart in workers' hands when they were taken down, Robertson said. The original shutter hangers, however, were saved and reused.

Windows were also left original since they could not be reasonably replicated, Robertson noted. And a wrought iron fence was put up in front of the home after an original photo in the DPU Archives showed such fencing.

While the shutters had been painted green in recent years, the renovation saw the door and shutters painted black and the trim white -- the only two color options available according to 1880 standards, Robertson said.

Meanwhile, the home's interior, with its extraordinary woodwork, created by Ireland himself as examples of his planing mill's capabilities, proved to be labor intensive as well.

"We decided early on," the DePauw facilities management spokesman explained, "to take it down to the original plaster and we removed all the old wallpaper."

The trim in the house "is just amazing," Robertson said, noting 12- to 14-inch high baseboards are featured with different woods utilized in each room.

"What amazed me when we first went in the house in 2010," he continued, "was that somehow over 130 years, no one decided, 'Hey, wouldn't this trim look good yellow?'" 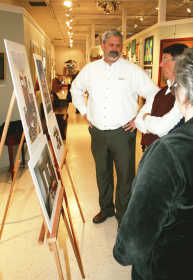 Explaining before-and-after photos and drawings of the historic John Ireland House, Tony Robertson of DePauw University chats with Paul Champion (right) and others from the Heritage Preservation Society of Putnam County Wednesday night.
Order this photo

In other words, no one had the gumption to paint over the handiwork of Ireland, who also fashioned a five-foot pocket door with different woods on each side to match the rooms the separate sides of the door face. One side of the pocket door is cherry, the other side walnut.

Three "absolutely gorgeous" fireplaces remain in the home, now outfitted with natural gas logs to highlight their form and function.

The interior has been decorated with numerous pieces of DePauw artwork along with a sound system -- "not sure that was original," Robertson joked -- throughout the house to facilitate its use for entertaining.

"We also sprinkled the house so we could protect our investment," Robertson said.

The rehabilitation effort is almost complete, he said, noting that some outside work still remains.

He also pointed out how DePauw moved two houses from South Jackson Street where the new athletic complex and expanded parking facilities have been built to South Locust Street, south of the Media Center.

"Early on it became apparent that we needed to move them," Robertson said of the two homes, explaining that he now has been involved in moving nine houses during his tenure at DePauw.

"It's not fun," he offered. "It will make you gray-headed and have you eating Rolaids."

DePauw has $1.4 million wrapped up in the two projects -- the two houses on South Locust and three on Anderson Street, he said.

Of that, $540,000 stayed in Putnam County and went to local contractors, something Robertson said DePauw never seems to get enough credit for stressing.

"We buy everything we can locally," he assured, "from the Headley Hardwares and the Feld's Carpets and the Shuee and Sons."

HPS President Mike Murphy asked Robertson if he would do it all again.

A June 14 public open house at the Ireland House is being planned as a fundraiser for the Heritage Preservation Society similar to the one conducted in August 2012 at the Clinton Zaring House renovated by Tim and Kim Shinn at Poplar and Vine streets.

Three new board members were elected during the business portion of the meeting, Melissa Archer, Mary Hirt and Rhea Zeiner. Outgoing board members are Paul Champion and Melissa Gough.