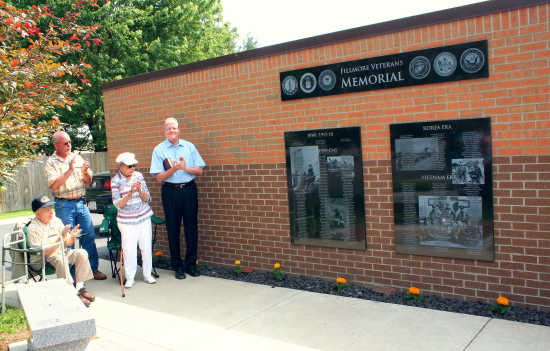 The unveiling of the new Fillmore Veterans Memorial, located at the northwest corner of Fillmore Elementary School, is applauded by Pastor Mike Faust of Fillmore Christian Church (right) and members of the audience at Monday morning's ceremony. The memorial includes a granite bench donated by Scott Herrick of Bittles and Hurt and Hopkins-Rector funeral homes in Greencastle.

FILLMORE -- A dream that started at the 2010 Fillmore Alumni Banquet became a reality Monday when the Fillmore Veterans Memorial was unveiled on a sun-drenched Memorial Day.

Dozens of Fillmore area residents and others with ties to the community were on hand as a memorial bearing the names of some 350 veterans of World Wars I and II and the Korean and Vietnam War eras was unveiled at the northwest corner of the school building by committee members Steve Cash and Jim Woods.

Howard Miller, a 1964 Fillmore High School graduate, was one of those whose name has been inscribed on the new monument to sacrifices made by the men and women of the community who attended Fillmore School.

"I'm humbled to recognized in this fashion by the community," Miller told the gathering after it moved inside the school gym for additional ceremonies. "It's a great day, thanks."

Cash recalled the genesis of the memorial idea.

He mused about the possibility of a memorial honoring the sacrifices McKamey and others in the community have made for their hometown and country.

When he mentioned the idea to John and Maxine Davies one day over lunch at Bert and Betty's in Fillmore, Maxine volunteered to help and already had access to the names for the World War I and II veterans.

"We worked on the names for four years," Cash told the assembled group of veterans, family and friends. "If someone was missed, we're truly sorry, but we did our due diligence.

"We began with a list of 174 names, and there are about 350 out there on that memorial now," Cash said, noting the first public mention of the memorial was a July 5, 2011 Banner Graphic story that prompted a response from a Vermont company, Picture This on Granite, that ultimately created the memorial. It even offered a sample.

"Once we saw that sample," Cash said, "there was no turning back."

The monument alone was a $6,300 project and the committee was able to raise more than $9,000 to cover the purchase, delivery and the installation.

Cash told a circuitous tale of how the more than 500-pound memorial came to be delivered and installed just days earlier.

When the original crane operator was unable to do the job that had been promised before Memorial Day, the committee turned to nearby Liberty Industries for help and had the heavy crate off-loaded and stored there for a few days.

Undertaking a series of phone calls in a quest for someone to install the memorial, Cash ended up finding South Putnam grad Troy Thompson on Linked-In, which led him to Dave Martin, who as luck would have it, is a former Fillmore resident.

But all the work was worth it Monday as Indiana Secretary of State Connie Lawson (a former state senator who served the Fillmore area) and District 44 State Rep. Jim Baird (R-Greencastle), a veteran himself, offered Memorial Day reflections.

"This memorial will serve as a reminder of the sacrifices of so many students from Fillmore," Lawson said, calling the town a fine example of a small-town America, Midwestern, Heartland community.

The products of Fillmore, she continued, exhibited the right values of patriotism and work ethic" that were instilled in them by "the way they were raised right here in Fillmore," Lawson said. 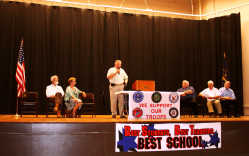 Addressing the gathering in the Fillmore School gym following the unveiling Monday of the new Fillmore Veterans Memorial, State Rep. Jim Baird (R-Greencastle) calls the event a "special tribute for the community to have come together the way you have to celebrate this Memorial Day." Others on the speakers panel (from left) are Committee member Darrell Storm, Indiana Secretary of State (and former state senator) Connie Lawson, Committee members Steve Cash and Jim Woods and Rev. Mike Faust.

"I speak for all Hoosiers," she said, "when I say our veterans have our utmost appreciation."

Rep. Baird, meanwhile, said he feels "a real kinship" with the other veterans in the audience and listed on the memorial.

"I am a Vietnam veteran," Baird said, slightly raising the prosthesis that is his left arm. "That's where I lost this arm, in a firefight there.

"This is a special tribute for the community to come together the way you have on this Memorial Day," he added.

"I hope the teachers utilize it in their classrooms," he said. "The kids going through here (Fillmore School) now are the second or third generation of those names on that plaque."