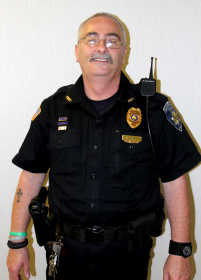 CLOVERDALE -- The Cloverdale Police Department is setting goals and accomplishing them with its latest one being the rebuilding of the reserve officer program.

Over the past year, Town Marshal Mike Clark has worked tirelessly to build rebuild the program, bringing in some of the most qualified people in the area.

"When I started there were three reserves. My understanding is that they've had more than that before," Clark explained. "One of the things I was asked several times in my interview was to get the reserve program going again, so that's been a goal since day one."

With that being his biggest priority, Clark interviewed countless potential candidates before coming to the decision to hire the 10 most qualified candidates that fit the department's goals.

"First, what people need to understand about reserve officers is that reserves work for free," Clark said. "They don't cost you anything, reserves buy their own equipment. It's not uncommon for reserves to spend $1,000-$1,500 over time getting all the equipment they need."

Once hired, all reserves must go through a 40-hour pre-basic course before they are allowed to do anything else. It is through this course that potential reserves learn such things as criminal law, traffic law, firearms training, defensive tactics training and more.

"We don't even allow them to ride until they finish that pre-basic course," Clark explained. "They have to put a lot of time and effort in before they can do anything. (The pre-basic course) is through academy-certified instructors. We've been very fortunate that the Greencastle Police Department has helped us tremendously by putting on a pre-basic class. They've helped us a lot getting people through."

Once the pre-basic course is completed, reserves must then go through a Field Training Officer program with the Cloverdale Police Department, which requires Clark, Sgt. Charlie Hallam or Patrolman James Martin to evaluate each reserve on a number of things, including driving skills, officer safety, knowledge of statutes, policies and procedures, attitude and more each time they work.

"It really varies from reserve to reserve on how long they have to ride with another officer before they're released on their own," Clark added. "Usually it's going to be at least a minimum of 500 hours. You do get exceptions to that when you bring someone on that has been a reserve before or has some other type of police training."

If the reserve completes both the pre-basic and FTO training, he or she is then able to patrol on their own. However, the Cloverdale Police Department requires that all reserves work a minimum of 16 hours a month, with many of them working more hours than required.

"They put in, not only the time they volunteer to work, but a lot of times they have to take time off their paid jobs if they have to go to court from an arrest or take time off to get their training in every year that they're required," Clark explained. "Some departments don't require as much training for their reserves, but we require the same amount of training from them as we do the paid officers."

That being said, Clark requires his reserves to go through such instruction as active shooter training, which was recently done at Cloverdale High School, trauma care, driver training and more.

"Basically reserves are people that are actually dedicated to helping the community. All of them that we have are strictly volunteers," Clark explained. "A lot of people think it's just people using it as a stepping stone, working up to a paid position. Some are that way, but if you look at our reserves we have some that have kind a desire to go on and be paid officers, but we have a lot that have no desire to move on."

With the funds not allowing for the hiring of more full-time officers, and a current ordinance restraining the program to just 10 officers, the Cloverdale Police Department depends on its reserves.

"In my opinion, I think we have one of the best reserve departments around," Clark stated. "Reserves are invaluable. With three paid officers here we can't cover 24 hours a day seven days a week. The reserves help fill in those times. They help us with special details. Generally, what I've always looked at, it takes about 10 reserves to equal about one full-time paid officer. I would like to go to 15 eventually, but I need to get some of them completely trained first."

Currently, the Cloverdale Police Department has reserves that are at various stages of the process, some are able to patrol on their own, while some are at the stage of riding with another officer. It is Clark's goal to have all reserves trained and able to be on the road on their own by the end of summer.

"I think we've come a long way," the marshal said. "Our ultimate goal is to get it where somebody is on all the time. Reserves have the same arrest powers, they have the same authority that any of the paid officers have."

* Kenneth Shepherd -- Currently a lieutenant at the Greencastle Fire Department. He's a certified as an EMT and has been in the Army National Guard for 17 years, serving in Iraq in 2006.

* Bill Hurley -- Was a motor carrier officer for the Indiana State Police for 22 years before becoming a federal police officer. His certifications include Haz Mat, Drug Interdiction, CMV post-crash investigator and S.T.O.P.S. instructor. He's served on the State Police Honor Guard Team and was a two-time recipient of the Ray Reed Award (Officer of the Year) while with ISP.

* Bill Bird -- Has been an EMT for 32 years with 34 years experience as a reserve officer.

* Bill Marsh -- Currently employed by the Hendricks County Sheriff's Department, holding the rank of lieutenant and is the assistant jail commander and gang liaison. Marsh also has more than 20 years experience as a reserve officer.

* Nathan Sparks -- Currently a paramedic with Operation Life. He is also a firefighter lieutenant with the Bellmore Fire Department.

* Chasity Sanders -- EMT with Operation Life and a volunteer firefighter with the Cloverdale Fire Department.

* Steve Marshall -- Has been with the Hendricks County Sheriff's Department jail division for eight years.

* Kevin Rollings -- Corporal at the Hendricks County Sheriff's Department jail division. Rollings also served four years in the United Sates Air Force. While in the Air Force was stationed at the Andrews Air Force Base, assigned to Presidential Protection Detail along with being deployed for both Operation Iraq Freedom and Operation Enduring Freedom.