Greencastle again comes out on top in sectional golf play 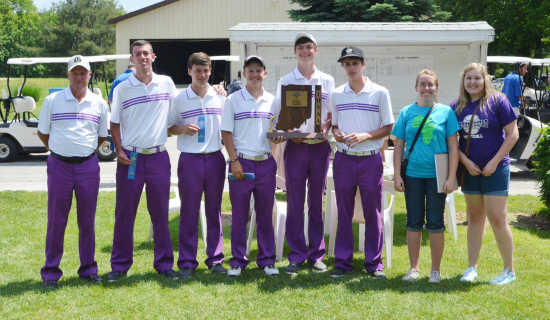 Greencastle's boys' golf team poses with the IHSAA Sectional Champions trophy after beating North Putnam and Southmont at the Crawfordsville sectional Friday. This win comes at the end of an exceptional season for the Tiger Cubs, who won the Western Central Conference tournament for the seventh consecutive time. The teams next match will be at regional where they will comepete at Country Oaks in Washington, Indiana. (Banner Graphic/TRENT SCOTT)
Order this photo

CRAWFORDSVILLE -- When the IHSAA shook up the golf sectionals last year, Greencastle's boys' squad came to Crawfordsville and took the sectional by 25 strokes over second place North Putnam.

A year on, with the squad only replacing one golfer, the Tiger Cubs blasted the field at Crawfordsville Municipal Golf Course Friday, cracking the 300 mark with a score of 298 to capture a second consecutive sectional title.

The Cougars repeated as runners up, shaving 13 strokes off the team score for a round of 332 to advance to the Washington regional for a second straight year. 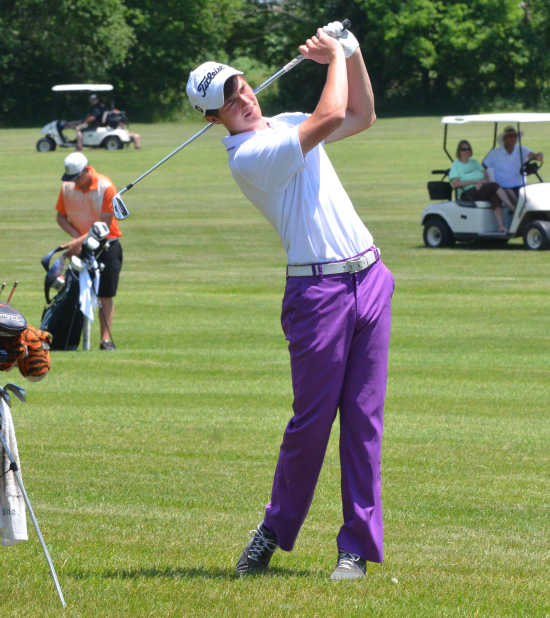 Luke Brotherton comes in one under par in sectional play at Crawfordsville. He scored 70 as Greencastle comes out on top and advance to regionals at Country Oaks in Washington Indiana. (Banner Graphic/TRENT SCOTT)
Order this photo

South Putnam's Derek Chestnut will also make the trek down to Country Oaks Golf Course, finishing fourth overall with a 75, good enough to make the list of individual advancers without a team.

Luke Brotherton took medalist honors overall, carding a 70 to make it two straight Tiger Cubs to earn the honor after Tanner Dean in 2013.

Alec Davis finished the round with a 74 while Dean and Jake Buis came in at 77 each. Carl Basile rounded out the group with a 90.

"We played a really good front nine," Paquin said. "We shot 142 and I think that ties the nine-hole record for Greencastle.

"We slid a little bit on the back but we played well all day. The last two weeks, they've turned it up a notch and we were ready to play.

"Our play has been good the last two weeks and it showed today," Paquin added. "We were consistent with scores of 70, 74 and two 77's and if we keep it going, I think we'll be ready for next week."

Davis and Brotherton, meanwhile, said that there were chances for both to play even better rounds.

"I didn't make many putts but I hit the ball well," Davis said. "I played well overall and good enough for today."

"Today went well," Brotherton added. "It was hard to get things going. I made a couple of birdies here and there but never strung them together and that kept me around par."

North Putnam's round was spearheaded by Austin Judy's 76, followed by Danny Smith with a 78, Mason Asher with a score of 82, Jake Smith's score of 96 and Bennett Hazelgrove's round of 103.

"It was a little more difficult waiting for the final scores," Patrick said. "Our number four and five came in with scores we weren't expecting.

"We were a little leery and I had to start doing some numbers. We did come in lower than we did last year with pretty much the same team we had from last year.

"We did drop strokes from the score last year but I think the team felt as though we could go lower than the 332 we scored," Patrick added. "We weren't going to catch Greencastle, who had a great round at 298 today."

Much like Greencastle, North Putnam brought a great deal of experience back to the course Friday and Patrick said that knowing the course better helped get the squad out of a few rough patches.

"The guys have played here a lot and the seniors have been up here several times," Patrick said. "We had a couple of practice rounds up here as we looked to get a lower score than we did last year, which we did.

"The familiarity with the course helped them with adjustments and course management. They got stuck in some predicaments, just like everyone else, but they came out okay in those situations.

Chestnut's round of 75 was the highlight of the day for South Putnam as Jimmy Rutter was the next lowest scorer at 91, followed by Chad Menke's 98, Austin Query's 111 and Tyler Neumann's 115.

Eagle head coach Kevin Metz said that the squad battled well over the course of the afternoon.

"We finished off the season as best as we possibly could," Metz said. "We had guys shoot season bests and I'm happy with the placement we had.

"We weren't in the top three but we know that the kids played well. Chad Menke had a good round for himself. Jimmy Rutter had a good one as well. Derek shooting a 75 and advancing as an individual was a great part of the day, too."

Chestnut, for his part, said that making it to the regional was a major accomplishment after coming within a stroke of advancing last year.

"It feels great to advance," Chestnut said. "The course played tough and there are a lot of good teams here. There were several good individuals but it feels great to go back to the regional.

"I struck my irons well. We started on the back nine, the harder part of the course, and I shot better on that side. I made putts when I needed to."

Metz added that, having cut eight strokes from last year's score, Chestnut could be a competitor at the regional.

"The sky's the limit for him," Metz said. "We want to get him ready to go next Thursday. He's played the course so we'll go down there to practice on a few things.

"We want to see him go low on the round and advance to the state finals."

Having played a round down there, Chestnut said that the task ahead was one that could be accomplished.

"You need to get off the tee well there," Chestnut said. "It's a course you can score on. I need to get my game ready and we'll see what we can do there."

For North Putnam, the challenge will be to improve upon a performance last year that saw the Cougars finish 17th overall and Patrick said that the squad was eager to face it.

"We're hoping to go back there and do much better," Patrick said. "Last year was the first time they had gotten out of sectionals and they wanted to go back this year and challenge themselves at that course again.

"It's a tough regional with some good schools coming into it. Greencastle is tough and other teams will be too, but like everyone else, we're looking for a good day down there."

Greencastle, meanwhile, will look to advance more than Brotherton to the state finals this year and Paquin believes the squad is ready to make the leap.

"Our top four players competed last year and Luke went on to the state tournament while Alec was close," Paquin said. "We just have to go down there and play like we did today. If we do that, we'll see what happens."

Brotherton and Davis were both eager to make amends for last year and challenge for a regional title and a place at The Legends Golf Club.

"Hopefully, we'll advance to state this year," Brotherton said. "We missed out by five strokes last year and we left some shots out there last year. We need to capitalize on this opportunity.

"It's all about keeping it together for 18 straight holes," Davis added. "We have to fight through the tough holes down there and that course has some challenging holes in it."

Next Match: Greencastle, North Putnam and Derek Chestnut advance to the Washington Regional at County Oaks Golf Course next Thursday.