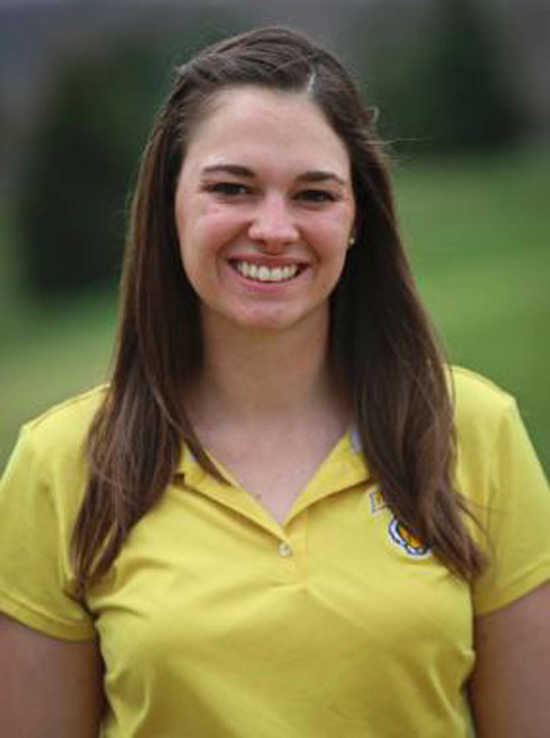 DePauw's Paige Gooch , a May graduate and member of the women's golf team, has been selected as the 2014 recipient of the North Coast Athletic Conference's Pam Smith Award.

The award recognizes a senior female student-athletes who has distinguished herself throughout her collegiate career in the areas of academic achievement, athletics excellence, service and leadership.

As the NCAC winner, Gooch will be nominated, along with Denison's Tiffany Davis, for the NCAA Woman of the Year award, one of the most prestigious honors the NCAA bestows.

Gooch also dedicated a great deal of her time to community service efforts.

Since arriving on campus in the fall of 2011, she was an active member of the Alpha Chi Omega Domestic Violence Awareness group which participated in fundraising events to raise awareness and money for the issue.

A volunteer at the Ronald McDonald House in 2013, Gooch was a Quantitative Reasoning Tutor on campus since 2012.

After having the opportunity to participate in the Management Fellows Honors Program, she gave back in the 2013-14 academic year as she assisted incoming students into the program with resume preparation, mock interviews and other job workshops.

Gooch also served in many leadership roles during her collegiate years, including a term as President of Alpha Chi Omega in 2012-13 and as a member of the Presidential Ambassador committee in 2013-14.

On the links, Gooch joined Sarah Gates '07 as the only four-time all-America selections in DePauw women's golf history when she earned first team honors this year to go along with second team distinction each of her first three seasons.

This season Gooch posted a 78.2 stroke average over 25 rounds for the second-best average in a DePauw season and was named the North Coast Athletic Conference Women's Golfer of the Year for the second straight time after winning her second consecutive NCAC title.

She earned similar honors in 2011 in the Southern Collegiate Athletic Conference prior to being named the Division III Freshman of the Year.

Gooch finished her career with a 79.02 average over 98 rounds which broke the previous DePauw record held by Gates. This year she won five of the 11 tournaments in which she competed with 10 finishes in the top 10. Over her career she won 10 events and was a top-10 finisher 32 times.

During her four seasons, the Tigers finished no worse than eighth at the national championships and matched the program's best finish with a second-place showing in 2012. As an individual, Gooch finished in the top 14 three times in her four NCAA appearances.

The NCAC Woman of the Year Award commemorates former Wittenberg women's basketball Head Coach and Associate Director of Athletics Pam Smith, who had a profound impact upon the athletes she coached and the students she taught over an illustrious career that spanned more than two decades.

She was the architect of the women's basketball program with the most wins and highest winning percentage in NCAC history through 2007. A 1999 Wittenberg Athletics Hall of Honor inductee, Smith earned seven NCAC Coach of the Year awards and compiled a 401-170 record after taking the reins of a struggling program prior to the 1986-87 season. She led the Tigers to eight NCAA Division III tournament appearances, twelve 20-win seasons, and 11 NCAC regular season championships.