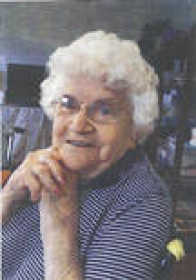 She was born Nov. 1, 1918, the daughter of Joseph and Josephine Fallinga Tomiczek.

She was a member of the St Bernard's Catholic Church in Crawfordsville, Roachdale VFW Auxiliary and the Roachdale Order of Eastern Star.

She was co-owner of Roachdale Wood Products with her husband Hershal.

She was preceded in death by a sister, a brother, three stepchildren, one step-grandson and one great-grandson.

Visitation will be on Wednesday from noon to 2 p.m. Burial will be at Roachdale Cemetery.

Online condolence may be made at www.serviesmorgan.com.