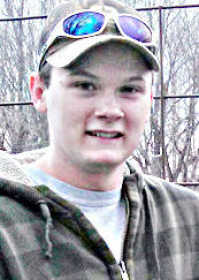 Family and friends are mourning the loss of a 17-year-old Greencastle High School student following a Monday afternoon tractor accident.

Riley Sutherlin, who recently completed his junior year, was killed when the backhoe he was operating overturned.

Sheriff's department Chief Deputy Tom Helmer said the backhoe overturned as Sutherlin was trying to drive over the edge of a pile of dirt. A narrow area between the dirt and a fence did not allow for a flat passageway.

The dirt was piled in the location due to the installation of grain bins on the Cedar View Farm, the Sutherlin family farm in southeastern Greencastle Township. The young man was working on this project at the time of the accident.

The tractor got off balance and overturned, throwing Sutherlin from the cab.

The young man was pronounced dead at the scene of the accident.

Putnam County Coroner Dave Brown, along with the sheriff's department, is handling the investigation. No autopsy is planned.

A celebration of Riley's life is planned for 11 a.m. Friday at Hopkins-Rector Funeral Home, Greencastle, with Pastor Rick Thomas officiating. He will be laid to rest in the family plot at Methodist Cemetery in Mt. Meridian.

Friends may call at the funeral home from 4-8 p.m. Thursday.

While Sutherlin was a Greencastle High School student, he took agriculture classes at South Putnam High School. He was also a member of the South Putnam FFA and 4-H, in which he was the co-president of the Junior Leaders.

He was also a member of McKinley Hill Church of Christ.

Riley is the son of Ron and Alana Sutherlin and the brother of Kendra and Dillon.