Basil Calvin Deck, 104, New Market, was called home by his Angel and the Lord at 12:27 a.m. Tuesday, June 24 in the Mill Pond Health Campus, Greencastle, where he resided.

He was born March 16, 1910, near Alvin, Ill., to John and Anna Jeanetter (Logan) Deck. The youngest of nine children, they migrated to Montgomery County in 1913. 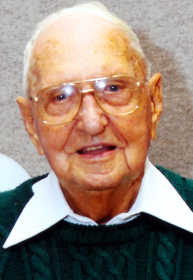 Basil was employed by Indiana Bell for 30 years as a cable splicer and supervisor, retiring at 60. After retiring, he spent the next 10 years traveling with his wife, Beatryce, until her health began to fail.

His hobbies were farming; making rag rugs; visiting with family and friends; and just sitting and enjoying the view from his home.

In addition to his wives, he was preceded in death by his parents; a set of boys that were stillborn; sisters Bertha Bollman, Verna Wier, Leona Caldwell and Lenora Sims, and brothers Marion and Elmer Deck.

Friends may call on Friday, June 27 from 4-8 p.m. at the church, where Masonic services will be conducted at 8 p.m.

Burial will be in the Oak Hill South Cemetery, Crawfordsville.

Online condolences may be sent to powerspriebefh.com.