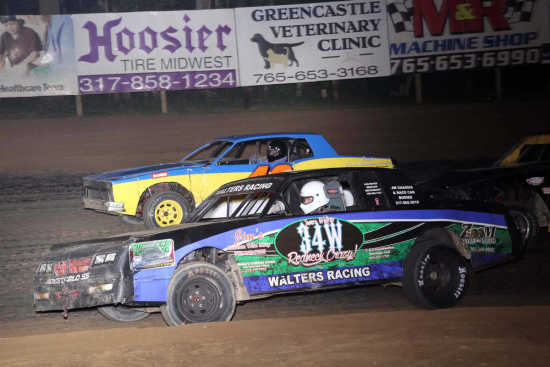 James Walters (No. 34w) does battle with RJ Pruitt (No. 40) early in the bomber feature before claiming his first career feature victory on Saturday at Lincoln Park Speedway. (Banner Graphic/CAREY FOX)
Order this photo

PUTNAMVILLE -- The chase for national championships was the story at Lincoln Park Speedway on Saturday night.

The second night of racing brought another wave of the top national drivers to the Putnamville oval just two nights after the USAC National Sprint cars rolled into LPS in front of a record crowd of better than 3,000 avid racing fans. This time around, the UMP Modifieds and Street Stocks were the headliners for the Road to the Patriot 100 event for the mods and the "Slick Griffin Memorial" race for super stocks.

Both races brought stout lineups as two-time defending UMP National Modified champion Devin Gilpin of Columbus, Ind. motored away from Derek Groomer to score his 23rd feature win of the season. The victory should essentially put him neck-and-neck with Jacob Poel for the national points lead. "Kid Dasco" as Gilpin has become known, watched Tyler Cain also narrow the points lead on Aaron Fields as Cain pulled away from an early duel with Fields to pick up the UMP Super Stock victory and the $1,000 payday. 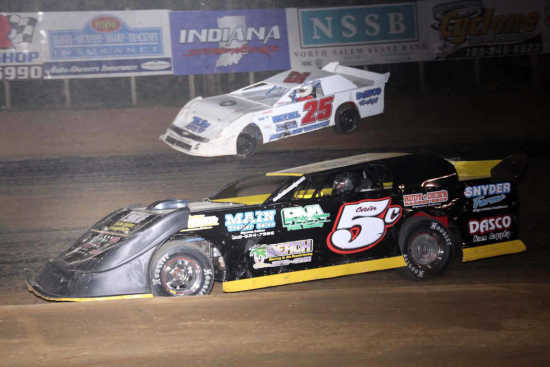 In a battle for a Lincoln Park Speedway feature win and the UMP national points lead, Tyler Cain (No. 5c) battled his way past Aaron Fields (No. 25) to claim the second running of the "Slick Griffin Memorial" race on Saturday. (Banner Graphic/CAREY FOX)
Order this photo

Cain's win was especially important as seven of the top-10 in national points were on hand to battle for the coveted victory. His 13th win of the year came in another Dasco Racing Supply machine with TSR Racing Engines & Transmission, Bob Poynter Ford, Cleanright Floor Specialists, Beck's Hybrid and Kendall Farms on board as sponsors.

The final two features of the evening went to a youngster and a veteran as James Walters scored his first bomber feature of his career in the opening A-main and CJ Bryan added another victory to his resume in the finale.

In the UMP Modified feature, Gilpin started on the pole after winning a six-lap dash for the top-two placing cars in each of the three heat races. While he was challenged on several restarts by fourth-place starter Derek Groomer, Gilpin motored away each time and claimed a solid win over Groomer, Dan Lewellen, Jake Humphrey and Kenny Carmichael Sr., who started 13th. 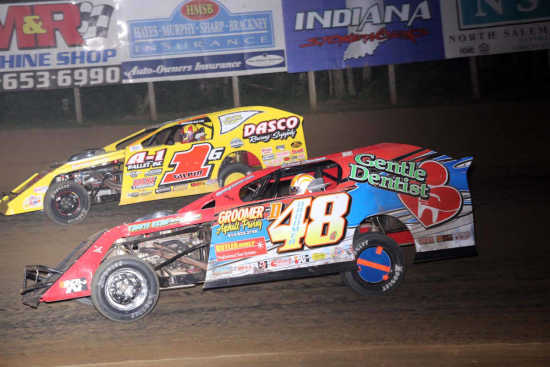 Devin Gilpin (No. 1g) recorded his 23rd UMP Modified feature of the season, pulling away from Derek Groomer (No. 48) to claim the $1,400 payday at Lincoln Park Speedway on Saturday night. (Banner Graphic/CAREY FOX)
Order this photo

Groomer was able to pull side-by-side with Gilpin during several different restarts, but once Gilpin began to build a head of steam, he wasn't seriously challenged in claiming his 23rd win of the year.

Cain had his hands full from the opening green flag as Fields went door-to-door with him for much of the first half of the race. A lap seven caution as Ralph Groomer and Josh Fagg tangled reset the field as Steve Peeden overcame early mechanical problems during qualifying to make a run into the third position ahead of Doug McCullough and Josh Boller.

By the midway point of the A-main, Cain had edged out into a lead and began to build a several car length advantage as Fields had Peeden to deal with over the final 10 laps. Behind them, Boller and McCullough were swapping spots in a thrilling battle for the fourth spot as Kenny Carmichael Sr. advanced into fifth-place.

With five laps remaining, Cain pulled away to claim the second running of the "Slick Griffin Memorial" event as Boller was scored second ahead of Carmichael, Fields and McCullough. Scott Carrington, Jake Leitzman, Josh McDaniel, Peeden and Paul Wright rounded out the top-10.

In the first bomber feature, Walters had his hands full for the entire race, holding off Scott Tidwell by staying tight on the bottom line as Tidwell tried multiple lines in search of the lead. David Wallen steadily moved forward and would eventually take over the second spot late in the feature and set his sights on the leader. However, Walters would hold on to claim his first feature win despite a caution with one lap remaining. Wallen locked down second ahead of Tidwell, RJ Pruitt and Dustin Colvin.

In the second A-main, Bryan cruised to an early lead and made it stand up, pulling away steadily to gain the win ahead of Ron Smith, Eric Miller, Mark Dickerson and Chad Weiner.