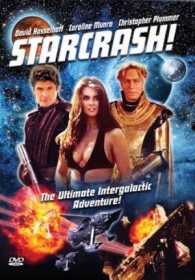 I was left with one lingering question after watching "Starcrash" - how in the world did the powers that be at Lucasfilm let this one slip through the cracks?

This low budget Italian sci-fi flick rips off the original "Star Wars" in so many way it's funny, but could it have paved the way for some elements in the second film of the original trilogy? You might be surprised with what you find.

In "Starcrash," we meet up with Stella Star (Caroline Munro), an outlaw smuggler and her sidekick Akton (Marjoe Gortner) with a band of Imperials in hot pursuit as they jump through hyperspace. They are subsequently arrested and sent to separate prison plants.

Stella serves her brief time of hard labor in a revealing bikini, but quickly escapes, regroups with Akton and is given a mission from the Emperor of the Galaxy (Christopher Plummer) to find his son.

Enter the evil Count Zarth Arn (Joe Spinell) who has, as they put it, a limitless weapon that takes a planet to conceal it.

So, does any of this sound a tiny bit familiar? Well, it's just the beginning.

Stella, Akton and a guardian robot with a southern drawl named Elle (Judd Hamilton) go in search of missing escape pods to find the prince. During their journey, Elle is destroyed and Stella is saved by a mysterious stranger named Simon (David Hasselhoff), who turns out to be the prince.

As Simon leads Stella through a series of caves, they are jumped by natives of the planet, but not before Akton appears and fights them off with -- A LIGHTSABER! I kid you not. A glowing blue laser sword with makes sounds as it's engaged, in motion and deactivated.

If that wasn't enough to tickle your "Star Wars" taste buds, later Akton dies and disappears before Stella and the Simon. Also earlier in the movie there's talk of the Imperial Navy, someone being "the best pilot in the galaxy" and when the smugglers' ship is getting ready for it's jump to hyperspace, they utter the phrase "hope this star buggie holds together."

The movie ends with a very, very drawn out space battle as the Emperor flies a floating city (at least it wasn't a city in the clouds) into the evil Count's ship, destroying it and saving the day.

Now before we start judging writer/director Luigi Cozzi too harshly for lifting key elements from that little movie set in a "galaxy far, far away," let examine a few other details of the movie.

First, there's the use of The Emperor of the Galaxy. Next, when the group goes in search of the prince, they first go to a planet made entirely of snow and ice. These two elements are familiar to Star Wars fans, but "Starcrash" come out in 1979 -- a full year before "The Empire Strikes Back" debuted with the ice planet Hoth and the evil Emperor.

Could it be writer/director George Lucas returned the favor and borrowed some elements from Cozzi's flick? It's not likely at all, but it's fun to think about.

Composer John Barry was a three-time Oscar winner when he scored "Starcrash" and Plummer would eventually win an Oscar for his supporting role in "Beginners" in 2012.

Overall, "Starcrash" is an awesome addition to the Schlock Vault. The effects are shoddy, the dialogue is out of sync and the premise is laughable. The fact that Munro wears not much more than a bikini for the duration of the film is also another great reason to watch.

Plus, any flick that had the guts to so blatantly rip "Star Wars" off a mere 18 months after its original release earns a gold star in my book.