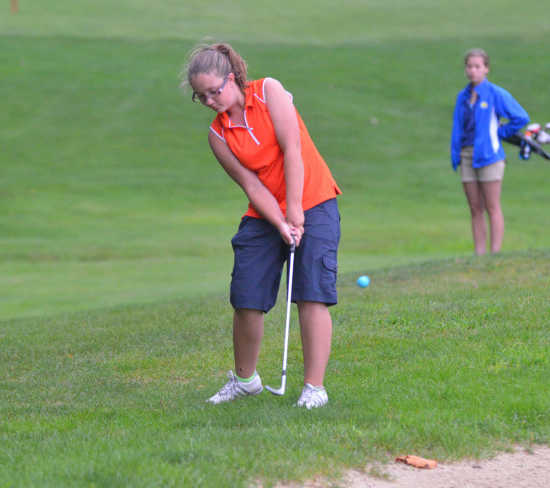 Southmont and Rockville made the trek to Twin Bridges for a three-way match that the Mounties won by 10 strokes over the Cougars 226-236-242, with the Rox placing third.

North Putnam head coach Linda Patrick said that the squad played to where she thought the girls would be this early in the season. 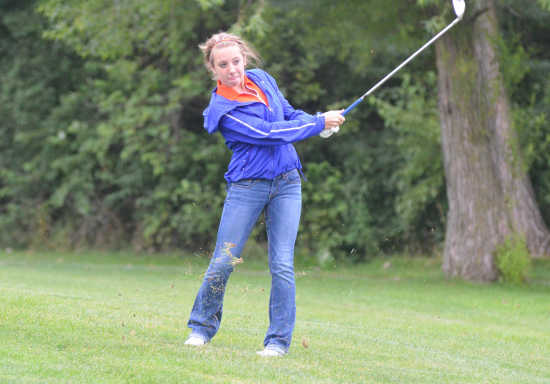 No. 3 golfer Emily Harrington of the Cougars watches her ball on Tuesday. (Banner Graphic/TRENT SCOTT)

"It's pretty much where I expected us to be," Patrick said. "Our three new girls are pretty new to the sport and are working on ways to face a course and work on predicaments that come up.

"There's a lot to be learned for those girls even though they have some skill. It may be a little early in the season for them to be thinking about that but it will come into play soon."

Olivia Zarate paced the hosts with a round of 54, followed in by Emily Harrington on 59, Jessie Cox with a 60 and Taylor Dixon's 63 to round out the scoring. Emily Eltz added a round of 68 for the Cougars. 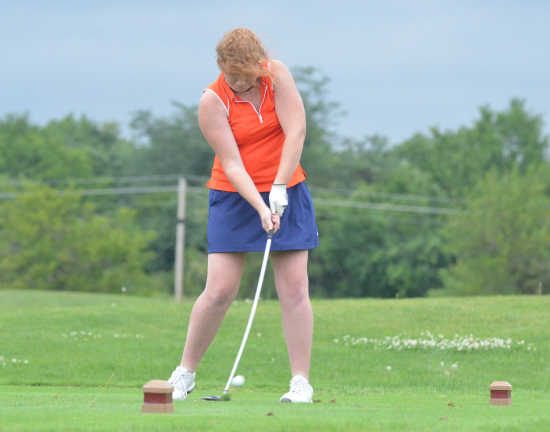 Patrick said the scores were in line with what she was expecting.

"Olivia had our best round today with a 54, the same score she started off last year with," Patrick said. "Emily Harrington is new to us and shot below 60.

"Our freshmen, Taylor and Emily, shot in the 60s and that's where I expected them to be. We played all nine holes and it showed we still have a lot of things to work on."

After having a week to practice before the match, Patrick said some of the things from the driving range had not quite settled in yet.

"We've worked hard on swings with the girls, trying to get them to do certain things," Patrick said. "They're not translating that well enough right now to affect their scores.

"There's a lot of things to work on. For the young girls, they need experience. For our experienced girls, they might think of where they finished last year and bring that forth now."

With Monday's match with Greencastle now moved to Thursday and made a three-way match with Cascade and a trip to North Montgomery to navigate on Wednesday, Patrick said that the squad would need to mentally buckle down for a tough three-day stretch.

"We'll talk on the bus ride home tonight about things to think about as they approach each shot," Patrick said. "We need to concentrate on some little things that will make their shots better and cut down on some strokes.

"There are things they've seen, whether it's pictures or videos, that they need to keep in mind to help them improve their games. We won't have any practice time for them to do that until Friday now.

"We go to Rocky Ridge Wednesday and Windy Hill on Thursday, so we've got to be mentally prepared as well as thinking about how they can improve, even while playing a match."