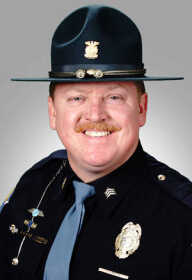 PUTNAMVILLE -- Two sergeants from the Indiana State Police Putnamville District, along with members of the Terre Haute and Indiana State University police departments, were honored at an awards ceremony Wednesday at the Indiana Government Center.

Sgts. Joe Watts and Richard Effner of the Putnamville District were presented with the Department Lifesaving Award for their actions during a 2013 detail in Terre Haute.

On Oct. 1, 2013, Sgt. Watts was flagged down by a citizen who reported heavy smoke coming from the Indiana State University married student housing building located on the Terre Haute campus.

Sgt. Watts, who also serves at the Putnamville public information officer, immediately responded. Arriving on the scene, he observed heavy smoke coming from the third and fourth floors of the building.

Watts then radioed State Police dispatch to start the Terre Haute Fire Department as well as other emergency personnel to the scene for assistance. 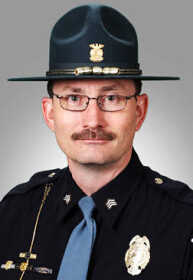 As a direct result of each officer's pro-active efforts to warn occupants in the burning building all residents escaped without injury prior to arrival of the Terre Haute Fire Department.