Greencastle claws back into the game but can't get win 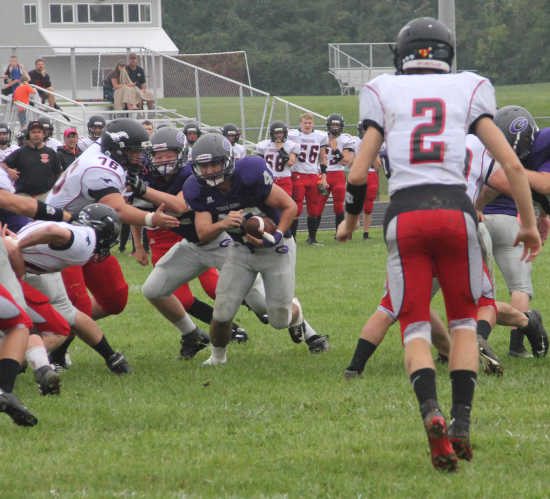 The defense of the Greencastle football team stuffed the running game of Edgewood in the second half, but a late-game interception sealed the Tiger Cub fate as GHS lost to Edgewood 20-14 Saturday.

"They're staring to buy in," Greencastle coach Ryan Spoonmore said. "They are letting us coach them. For the most part they are executing the game plans that we put in. I saw some hurt there today and some frustration. When start to see some of that after a loss, you are on to something because it starts to mean something to them."

The game began Friday night with hot weather. Edgewood's quarterback, along with running back Gabe Koontz put pressure on the home team on the first drive. The Mustangs utilized a run game all the way to a first quarter score. They missed the extra point.

On the next offensive possession for Edgewood, Harrison was able to break a long 40-yard touchdown run making the score 13-7.

Greencastle offense then kicked into life. After a 12-yard run by Zach Secrest, personal foul from Edgewood and a 17-yd pass to Anthony Rossok, Greencastle's quarterback Nick Costin found Nathan Tesmer in the end-zone for an 8-yard pass.

More unsportsman-like conduct from the visitors forced them to punt, but Greencastle couldn't capitalize. Secrest and wide-out Chandler Hyten helped the Purple Pride get into scoring position, but the sophomore quarterback threw his first interception of the game, after a chop-block penalty made it first-and-25.

The defense of Greencastle made a series of great plays throughout the game. One of which was a fumble recovery in the second quarter, where the ball changed hands in the blink of an eye.

The offense however was forced to punt after a first down sack, and Edgewood used the power running of Koontz to push the ball into scoring range before punching it in, before halftime.

Shortly after the third quarter began the game was delayed due to lightning and play resumed Saturday at 11 a.m.

The second day of play started 20-7 and with a Greencastle punt. The defense held strong once again and a high Edgewood snap on the punt, put Greencastle in great field position at the 8. From there Secrest punched it in making the score 20-14.

The Greencastle defense continued to force the Mustangs to punt however Greencastle just couldn't get the passing game moving well. Another interception kept the defense on the field.

"Offensively I thought we were better (Friday) night," Spoonmore said. "We were more crisp last night. We had our halftime adjustments ready to go last night then the delay came. We kept with today. I just didn't think we weren't as sharp."

A few good plays by the Tiger Cubs, including a big Secrest tackle on a 4th-and-3, a ten-yard sack by Tesmer and a holding penalty that called back a 37-yard touchdown run, kept the visitors out of the end-zone.

"Defensively we missed more tackles this week than we did against West Vigo," Spoonmore said. "Overall the guys got after it. They were flying around today. They came back a lot more sharp. They made some plays for us and also gave us a chance to do something at the end."

With just over two minutes to play in the game, Secrest and the offense had the length of the field and the win in front of them. A quick pass was on target to Ryley Cook but on a 4th-and-five Edgewood picked off Costin for a third time, sealing the win for Edgewood.

"Give Edgewood credit. Their coaches coached the up," Spoonmore said. "They were very prepared and they had to come back up here. They've got a good team."