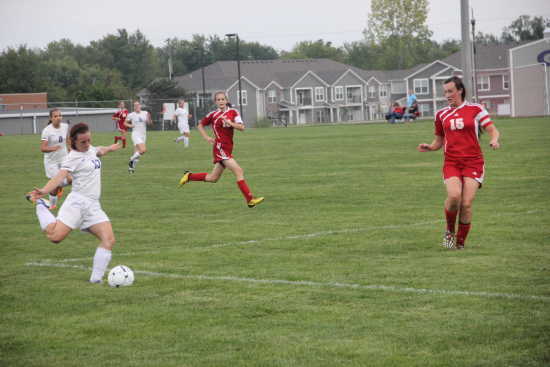 Bailey Lausee attempts a pass toward the goal late in the game. She scored once and assisted Madelin Graham.(Banner Graphic/JAY LOCKETT)

The atmosphere was exciting as the Greencastle girls soccer team, who were coming off of a loss to Terre Haute North, hosted Terre Haute South Tuesday. The game was tightly matched throughout and ended in a 4-4 tie.

Greencastle struck first in the game when sophomore Grace Smith kept the ball in play and then timed a nice assist into a freshman Madelin Graham score.

"Going out from the start, we had a really strong offensive line, that, I think, really connected with some speed and their connections were really coming together," GHS coach Angela Weeks said. "We had a really great pace setter, (Junior) Bailey Lausee really stepped it up today and brought down some long drives and some beautiful crosses that really brought the intensity up."

Goalkeeper Amelia Smith left her mark on the game's recording 20 saves to keep the Lady Braves of Terre Haute South at bay.

"I thought we performed very well," Smith said "I think we did a good job of coming together in the middle. I know our center-mids were kicking butt."

The Braves were able to score before halftime making the score 2-1 at the half.

However much like the first half the Lady Tiger Cubs came out with intensity after the break, and Lausee set up Graham from across the field to get a tying score.

"Big competition, Terre Haute South and being in there was really good for Bailey," Weeks said. "Also at the same time having some attacks coming strong from Grace Smith who plays forward position that really set it up. That enabled Graham to get the score."

The Braves put the pressure on the home team again when they scored midway through the half making the score 3-2.

"I feel like as a team we handled the game pretty well," Smith said. "We had some weak spots but when that happened we clean it up right again."

It was then Graham's turn to return the favor for Lausee who sneaked a goal in through the keeper's legs to tie the game at 3-3.

It was then sophomore Lauren Harris' turn to get in on the action as some great forward play bounced the ball into scoring position and she put it into the net for the go-ahead score. 4-3.

Terre Haute South kept the pressure on and scored a game-tying goal with 14 minutes left to play.

The teams then stalemated each other and the Braves were able to survive a Tiger Cub assault in the waning seconds of the game.

"Midway through the season we are starting to trust," Weeks said. "I think a strength right now is coming in supply with their cohesiveness to start top trust and understand each other's position. Being able to take that risk because when you play soccer you take a risk. They are able to believe in themselves but also trust that a teammate is going to be there."