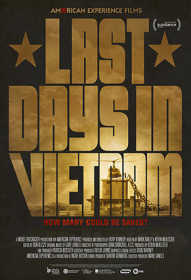 The powerful footage of the final days before the evacuation of Saigon at the end of the Vietnam War make director Rory Kennedy's "Last Days in Vietnam an unbelievably riveting watch.

It's interesting to hear how leaders in North Vietnam feared U.S. President Richard Nixon and how his resignation in 1974 was the catalyst for the North's final invasion into South Vietnam.

Following the signing of Paris Peace Accords in 1973, the United States was able to bring its troops home, leaving behind thousands of key personnel and American who had built a live in South Vietnam.

The calm lifestyle was quickly turned upside down when the North army began pushing south with its sights on overtaking Saigon and claiming all of Vietnam.

The story that unfolds is one of a group of soldiers unwilling to turn their back on the people they were there to help protect and their efforts to get them to safety.

Not willing to accept that the North's army was closing in fast, U.S. Ambassador to South Vietnam Graham Martin refused to make concrete evacuation plans involving Americans and the thousands of South Vietnamese who aided them during the war, thus leading to the hectic final hours before the fall of Saigon.

But for all the failures, soldiers and pilots defied orders and did whatever necessary to get as many people out of Saigon as possible. When it was clear an all out evacuation had to be made, a few thousand South Vietnamese gathered inside the embassy ground waiting for their turn for salvation.

With only a 24 hour window to get them to safety, pilots pulled flew missions for 18-plus hours straight to get people to awaiting ships off the coast. Soldiers escorted evacuees to the docks via van through the crowded streets as well.

The heartbreaking aspect to the story is of the thousands of people gathered inside the embassy, less than 500 had to be left behind as President Gerald Ford sent order for Martin to leave his post. They had to watch helplessly as the final helicopter lifted off and disappeared in the distance.

Knowing what was happening, South Vietnamese soldiers flew their own helicopters to American ships at sea. Once they landed and their people were safely on board, the troops had to push the aircraft off the deck and into the sea to make room for awaiting helicopters to land.

Naval commanders were astonished to see multitudes of people clinging to ships as the sun rose the following day. Ships that were made to house a few hundred had a tens of thousand people on board and in search of a safe haven.

Back in Saigon, South Vietnamese soldiers abandoned their gear in the streets in hopes of not being detected by the incoming North Vietnamese army. There are images of streets literally lined with military boots.

The film doesn't gloss over American's failures in those final days and hours in late April of 1975. It acknowledges that we as a nation failed to act when we should have and how we should have, but illustrated the American spirit of not giving up, depicted by a group of military people willing to put their careers and lives on the line to do what was right.

Kennedy's interviews show American soldiers and officers who are proud of the efforts in those final days and hours before the fall of Saigon, but there's also pain behind their eyes.

Former U.S. Army Capt. Stuart Harrington described the situation best when he observed, "Vietnam in a microcosm: promises made in good faith, promises broken, people being hurt because we didn't get our act together."

Kennedy weaves a riveting tale about a period in American history which people either choose to forget or simply ignore. The images and footage captured by journalists on the ground and in harms way is breathtaking.

This is one of the best films I've seen this year.