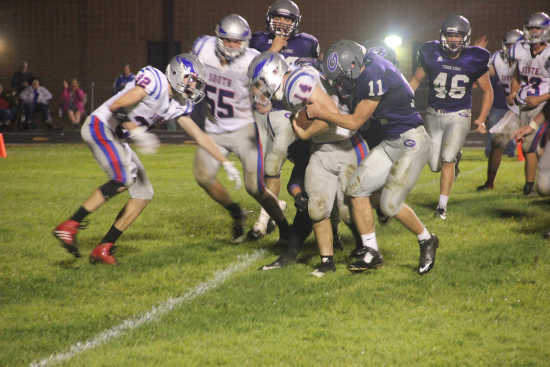 Greencastle had its mindson an upset when it went into its locker room with a big lead, but South Putnam spoiled the party and mounted a second half comeback to take the victory 20-16.

"Wow," Eagle coach Nathan Aker said. "I'm so proud of our guys. With the adversity that we faced this week, it was all in house. We had a guy John Thibodeau at home with a flu bug. These kids made a commitment. They wanted to win one for him. We did that tonight."

The Eagles were stumped though to start the game as Greencastle used a variety of players to work the ball into Eagle territory before quarterback Nick Costin hit Ryley Cook for a 15 yard game, putting the Tiger Cubs on the goaline. 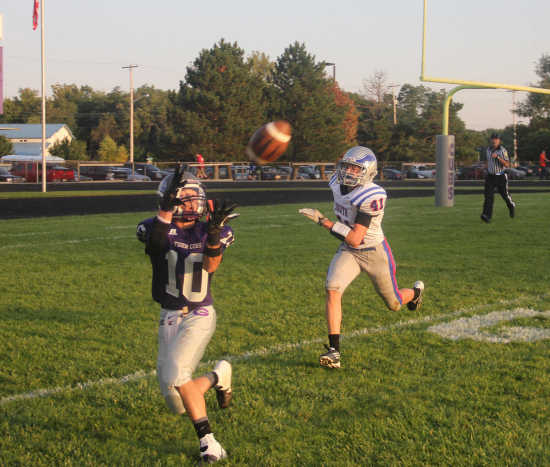 Ryley Cook with a big catch for Greencastle taking to ball to a goal line. (Banner Graphic/JAY LOCKETT)
Order this photo

This allowed Zach Secrest to punch in in making it a 7-0 game.

Into the second, Chandler Hyten and Secrest provided the muscles while Costin and Cook continued their chemistry to get another score for the Tiger Cubs.

"We just worked hard all week to get better every day," GHS coach Ryan Spoonmore said. "That's whats it's been all about so far. I had a great friend talk to me this week and motivated me. We just went to work. We had a good game plan against them and we had some great things going for us. Again it's fundamental football." 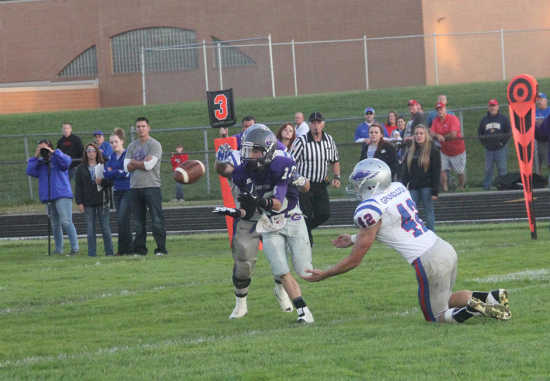 Cook with a Touchdown catch in the second quarter. (Banner Graphic/JAY LOCETT)
Order this photo

With the game at 13-0 due to a missed extra point, South Putnam turned to Lucas Lorian and began to drive.

The Eagles were moving well until a pass went awry and Secrest was able to get a jump on the ball for the pick.

Greencastle turned the turnover into three points making the score 16-0 . 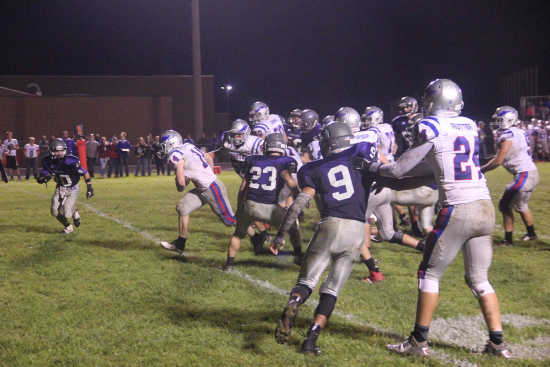 Shaffer with his second TD run of the game. (Banner Grapic/JAY LOCKETT)
Order this photo

Before the half, South Putnam was determined to get a score marching all the way down to the three-yard-line before Lorian was stopped short just before the halftime whistle.

The Eagle momentum rode the team through the second half as they were able to stay in attack mode even after McHugh's second interception. The defense stepped up on a big third down and with Lorian and Kyle Shaffer leading the offensive charge the Eagles were able to cap a 15-play drive with a Lorian touchdown.

"Our kids had a choice at halftime whether to take or to give and we really stepped up," Aker said. "What a great effort in the second half."

Greencastle wasn't done. They pushed and began to threaten the Eagles. But on a crucial 4th-and-1 to start the fourth quarter a botched snap gave SP the ball.

From there it was Lorian getting the visitors into scoring position and then Shaffer punching it in. The two-point conversion was no good, leaving the Eagles down 16-14.

"We did great," Shaffer said. "We came out in the second half and played like a football team. Lucas Lorian picked it up. He played hard in that second half. We stuck together and we play as a team. That's how South Putnam does."

Greencastle, still with the game in its hands gave it up again on a fumble allowing South to gain a chance to take the lead.

Seven plays later Shaffer was crossing the goal line to give the Eagles what would be their last score of the game.

After the win Aker, who picked up his second win as a head coach, was enamored by his players' performance and couldn't give enough credit to each and every player on the field.

"The seniors played well. Josh Tubbs had a great day. Gierke was all over the place. Joey Masters and Zane Yon and Trevor Long those guys just keep playing."

The Eagles next contest will be at county rival Cloverdale while Greencastle will take on the rival Cougars for two homecoming showdowns.