BLOOMFIELD -- North Putnam's football team traveled to Eastern Greene looking to pick up its third win of the season and deny the hosts a fifth straight win.

The Cougars got on the board just before halftime with a 25-yard field goal but watched as the Thunderbirds scored with three minutes left in the game to claim a 6-3 win.

North Putnam coach Greg Barrett said getting adjusted to the conditions and being in the right mind frame was a big part of how the Cougars kept themselves in the game. 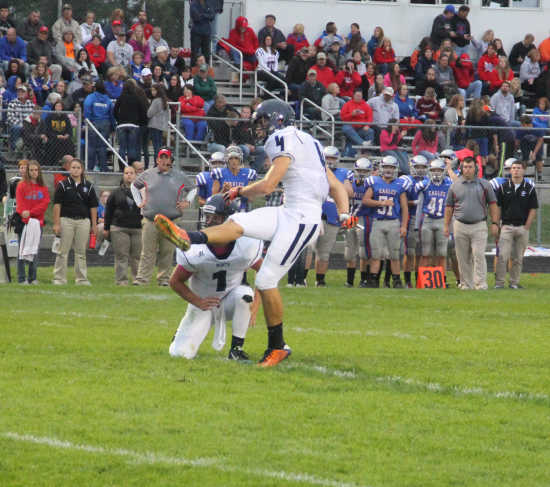 "We knew it was going to come down to being consistent and battling through the weather," Barrett said. "I thought they did a great job in the first half.

"It was a hard fought game on both sides of the ball. I'm proud of their effort, I think we're getting better and we have to let this hurt and get ready for next week."

With the wind swirling and the rain beating down, passing the football became an adventure every time one was called.

Instead, the game turned into a slugfest on the ground as the Cougars spent most of the first half with quarterback Bradley Hodges under center and two fullbacks ahead of Jake Riggen.

Eastern Greene was the first to threaten, though, putting together a 14-play drive that stalled out on the visitors' 14 when Grant Ewbank and Jensen Conlin sacked Thunderbird quarterback Briar Martindale on fourth-and-10.

North Putnam responded with an 18-play drive that stalled out in similar circumstances when Hodges could not find an open target on fourth-and-nine on the Thunderbird 19.

A botched punt attempt set the Cougars back up on the hosts' 15-yard line. After treading water for three plays, Hodges missed the fourth down snap and lost the ball on downs.

Eastern Greene turned the ball back over on downs with 0:44 remaining in the half and Hodges made the most of the extra possession with a 39-yard run to the Thunderbird 10.

Daniel Huffman made a 25-yard field goal three plays later to hand the visitors a 3-0 lead going into halftime.

Barrett said grabbing the lead was important in a low-scoring contest.

"We adjusted to our full house, jumbo-type set and ran the ball pretty well. Getting that field goal before halftime was huge for us. I thought we came out in the second half and didn't quite move the ball as well, but it was a battle on both sides of the ball."

The Thunderbirds took the opening possession of the second half as far as the North Putnam 11, only for Martindale to lose 11 yards on third down and fail to find a receiver on the ensuing fourth down play.

Two possessions later, another promising drive for the hosts ended when Cameron McPherson intercepted Martindale to preserve the Cougars' lead.

North Putnam's offense, however, slowed considerably in the second half. Barrett felt that with the conditions settling down, the Cougars should have been able to get into the end zone.

"There's no doubt about that," Barrett said. "We couldn't get in to some of the sets we wanted to. We had to be careful with the field conditions getting outside but I still think we did a nice job with some things. Our power run game was working pretty well, so we stuck with it, trying to grind the game out, and relied on our defense."

As time began to tick down, Martindale connected with Will Cole for 33 yards to the Cougar 2-yard line and on the next play, Brent Price plunged in for six to give the hosts a 6-3 lead.

The visitors tried to mount a late comeback but lost possession on downs near midfield when Hodges fourth-and-six pass slipped through the grasp of McPherson.

Eastern Greene grabbed a first down two plays later and ran the clock out to complete the narrow victory on the Thunderbird's homecoming night.

The late score stung but Barrett said the players did everything they were asked to do.

"(Will Cole) made a great play and a great catch and I though our guy was all over him. Tucker Lowe played him well but he caught it and unfortunately, we ran out of time in the end."

The Cougars return home for senior night next Friday as Seeger makes a rare stop in Putnam County.

Barrett said that the squad wanted to get the next win as soon as possible and would be ready to get back to work on Monday.

"Hopefully, we hurt from this one and I know we are," Barrett said. "They're still hungry for success. We have to watch film and see what Seeger is like. I don't know much about what their offense or their defense is so when we study the film, we'll have a better idea of what to expect.

"Seeger is traditionally a great program but as long as we keep taking care of the things we need to do, that will bring us to our goals. I expect us to come out this week and work hard to get better."