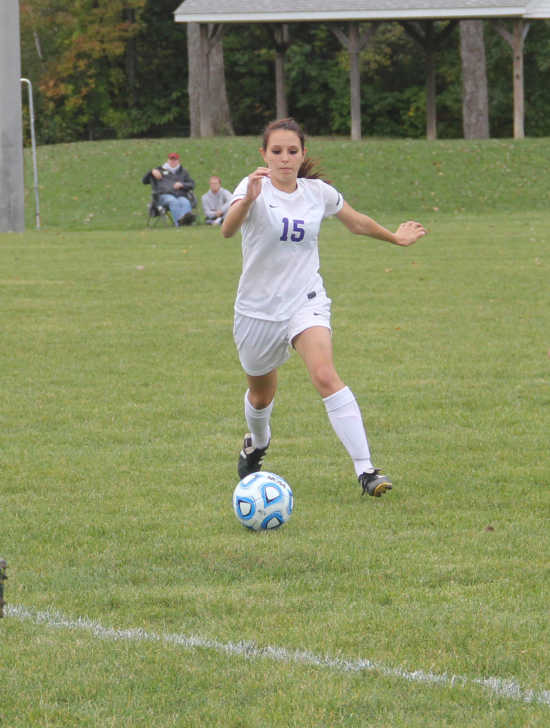 Victoria Sampson moves the ball up the field for the Lady Tiger Cubs. She is one of many GHS juniors who will be intricate on next year's team. (Banner Graphic/JAY LOCKETT)

The Greencastle sectional began this week for the Lady Cougars and the Lady Tiger Cubs and both teams had been preparing for a showdown at Greencastle.

The Lady Tiger Cubs played a Cascade team who many in the area thought would be a nice challenge for anyone, while the Lady Cougars played Southmont, which they had beaten twice earlier in the year.

Unfortunately both teams fell to their opponents and said goodbye to their senior players. Greencastle lost 6-1 and North Putnam fell 3-2. 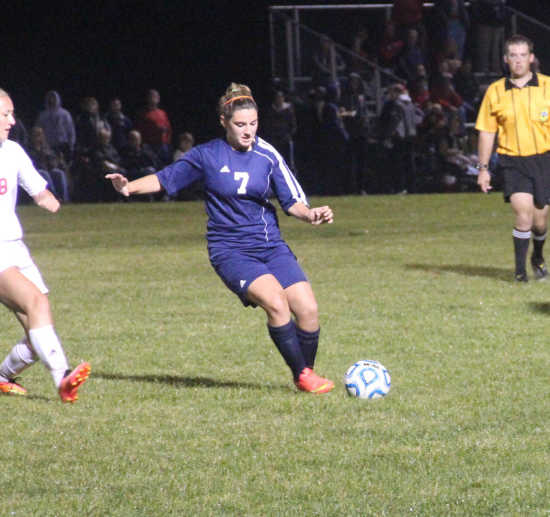 Laurel MacGregor scored the first goal of the game for the Lady Cougars. She will take over senior responsibilities next year along with Claire Sims and Destiny Eltz. (Banner Graphic/JAY LOCKETT)

Greencastle played on Monday and wanted to get started early but just couldn't keep pace with the Cadets.

They went into halftime with a 3-0 lead over the home team and never let up.

"I think in the second half we just got worn out," GHS coach Angela Weeks said. "We really went out headstrong. The first half focused on our communication and being able to control the mid. We did really well for the first 32 minutes. I was so proud of our girls. It was an honor to play Cascade. They have a great team."

The second half saw Cascade score three more goals before Greencastle could get onto the scoreboard.

Grace Gillen broke through the defense and picked up the score. It is the underclassmen like Gillen that keeps Weeks optimistic that Greencastle will become one of the top soccer teams the area next season.

"For the future I'm definitely looking forward to working with these girls again," Weeks said. "We have a dynamic cohesiveness that is present on the field. This season has been a growing season for them in the terms of new players joining. We've got promise coming in with our freshman and sophomores. It's been a season for them to learn how to play varsity ball."

Even with the younger players the team will be short of Breanna Ferrand and Sydney Secrest who really worked on the team to control many possessions and served as great team leaders.

"We are sure going to miss them," Weeks said. "I wish the best of luck to our seniors. Sydney and Breanna worked hard for us. They have been great role models."

North Putnam played Tuesday and though the game was a rematch the conditions were different and hazardous. The field was wet from the rain all morning and there were puddles and mud pits on the field.

That didn't dampen the Lady Cougar spirit because they came out ready to play.

Just eight minutes into the match Laurel MacGregor took a feed from Christa McRoy and scored the first goal of the game.

It was then a shot from Kaelynn Abner from about 20 yards out that made the score 2-0 with the Cougars sitting pretty.

Then as inclement weather arrived the game was delayed an hour and the play resumed with an even wetter and muddier field.

"We were working we'l the first half," Cougar coach Chase Hiland said. "We had a really good first half. We were pressuring well and had good positioning. We had great energy. Those first two goals were just the results of good plays."

After the delay and the very short halftime break, the Mounties struck quickly into the half and another goal a few minutes later made the score 2-2.

"I can't blame the weather," Hiland said. "After the break in our last two games we've come out flat."

The game was tied for the majority of the second half and North continued to play well and continue working toward shots on the Mountie goal.

However to no avail and with 1:16 left a great crossing pass was converted by the Mounties for the game's final goal.

"They'll look at this game and I'm sure they'll be down," Hiland said. "But they'll be over it. I think that we are young and optimistic about the future. I think they will be excited about what we can do in the future. They've improved from last year."

Of course with every season the team will graduate a few key players and the Cougars are no different.

"I'd like to thank the seniors for coming out," Hiland said. "They were all my defensive people this year. They all had good attitudes and were willing to work. I had a good group of seniors. With me being on the first year with them, you'll never know how seniors are going to react. They were very gracious and helpful and they led the team well."