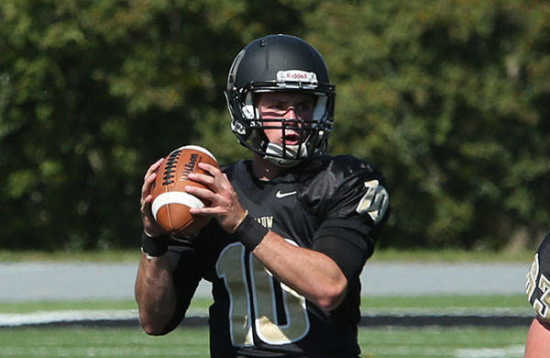 Quarterback Matt Hunt eyes the defense as he looks to make a throw. (Courtesy Photo)
Order this photo

OBERLIN, Ohio - DePauw scored touchdowns on six of its first seven possessions, totaled 579 yards of offense and intercepted four Oberlin passes on the way to a 54-14 North Coast Athletic Conference win over the Yeomen.

The Tigers drove 55 yards in seven plays on their opening series with Jack Gruber scoring on a 13-yard run to make it 7-0 just 5:25 into the contest. DePauw's Hamm Hooper intercepted Yeomen quarterback Lucas Poggiali on Oberlin's first play of the next drive and the Tigers took over on their own 42. The Tigers needed just eight plays before Gruber scored on a run from the 3 to push the lead to 14-0 with 6:27 left in the quarter.

Oberlin collected its initial first down on the next series, but on third down Garrett Rice picked off Poggiali at the Oberlin 40. On the next play, DePauw quarterback Matt Hunt connected with Amen Galley for a 40-yard scoring pass to make it 21-0.

The Yeomen reached the board early in the second when Blake Buckhannon's 2-yard run capped a 10-play series that covered 75 yards. DePauw responded as Gruber's third touchdown of the game came on a 20-yard run with 12:05 remaining in the half to push the lead to 28-7.

Oberlin countered with a 10-play, 77-yard series as Poggiali teamed with Trace McConnell for a 27-yard pass play with 7:31 remaining in the half to cut the lead to 28-14.

DePauw appeared headed to another score before Hunt was intercepted by Gabe Edwards in the end zone. The Tigers' Cody Baker returned the favor as he intercepted Poggiali at the DePauw 39 on Oberlin's fifth play of the next drive.

A Connor Jeffers 7-yard touchdown run and the point-after from Marko Adams capped a five-play drive and made it 35-14 with just 39 seconds left in the half.

The second half was all Tigers as they outgained Oberlin 262-76 over the final 30 minutes. DePauw took the second half kickoff and drove 66 yards with Hunt connecting with Jay D. Robinson for a 32-yard score.

Paul Simon notched the Tigers' fourth interception of the day on the next series, but DePauw was forced into its only punt of the afternoon and Simon landed it at the Oberlin 1.

Khalil Rivers was tackled in the end zone on third down by DePauw's Kevin Kiyosaki for a safety.

Jeffers returned the ensuing free kick to the Oberlin 45 and the Tigers advanced to the the Oberlin 11 before a penalty pushed them back to the 23. Adams booted a 40-yard field goal to make it 47-14 with 1:49 left in the third.

The final points of the game came on Jason Kirchhoff's 3-yard run with 10:42 remaining in the game which capped an 88-yard drive.

DePauw finished with 579 yards of offense which marked the most since September 12, 2009 including 332 rushing yards which was the best ground performance since November 5, 2005. Oberlin totaled 268 yards in the loss. The Tigers also held a 29-12 edge in first downs.

Kirchhoff rushed for a career-high 118 yards on 16 carries for the third straight 100-yard performance by a DePauw back. Gruber's three scores and 59 yards came on just eight carries, while Galley added 62 yards on 14 attempts.

Hunt completed 12 of 16 passes for 247 yards with two scores and one interception. His passes went to eight different receivers with Jeffers leading the way with three grabs.

Buckhannon paced Oberlin with 30 rushing yards as the Yeomen totaled just 79 on the ground.

Poggiali completed 13 of 26 passes for 189 yards and a score but was picked off four times. McConnell caught five for 90 yards.

Defensively, Philip Ganser paced the Tigers with 10 tackles while Will Longthorne added seven. Spencer Conley paced Oberlin with 10 tackles with Bennett Jackson and Tim Kondo each chipping in nine.

DePauw returns to Blackstock Stadium next Saturday, October 18, for a 1 p.m. NCAC contest with Ohio Wesleyan.