Cloverdale closes season with loss to Linton on Senior Night 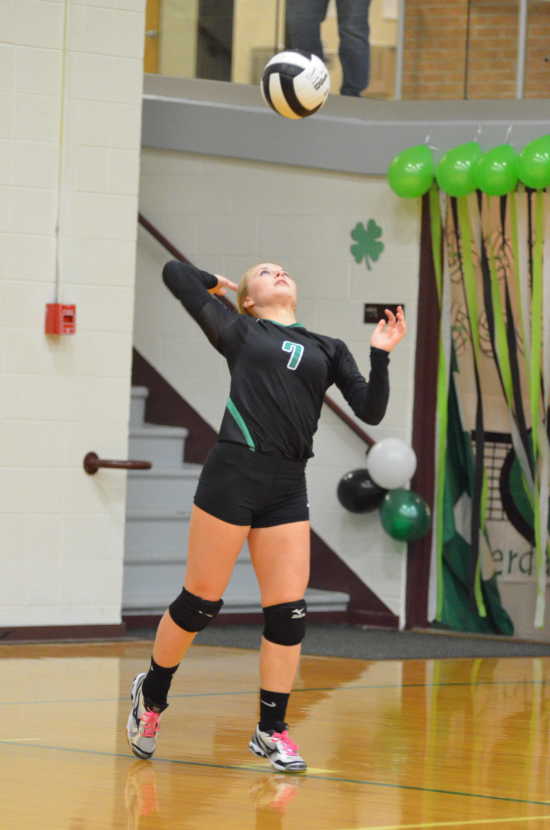 Jessica Winders serves during the match against Linton. The senior recorded three aces in the loss to the Miners. (Banner Graphic/TRENT SCOTT)

CLOVERDALE -- Having halted a four-match skid with a win over Southmont, Cloverdale's volleyball team looked to end the season with a win on senior night over Linton.

The Miners were looking to end a losing streak of their own and did so, knocking back the Clovers in the opening two sets before eking out a thrilling third set 25-20, 25-15, 25-23.

Cloverdale head coach Kathy Moore said that Linton's lineup put off the team with some of their early play.

"Linton has some good athletes and we got back on our heels," Moore said. "We didn't play our game and didn't hit the ball until the third set. 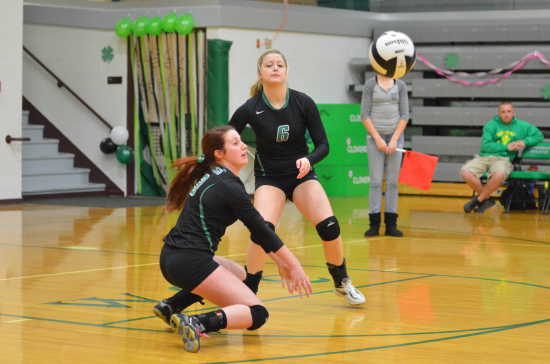 "We hate losing here. This is only the second time all year we've lost here this season."

Moore added that much of the early nerves were attributable to overplaying on the squad's part.

"On senior night, there's a lot of emotions and it's hard to think about that game being the last time they'll be on this court," Moore said. "I think that was part of it.

"I also think there was pressure to perform well and sometimes that's hard to do. There was more pressure tonight because it was senior night."

Cloverdale took the next four points and would eventually cut the seven-point gap down to two at 17-15, but could not narrow it further as the Miners gradually opened up a five-point gap that held through the end of the set.

With Linton anticipating much of the Cloverdale attack, Moore said the squad started to play away from their strengths.

"It set us back," Moore said. "They blocked us once and a while, but they had our timing down pretty well in the first set.

"We started tipping a lot in the second set and that's not really our game."

The Clovers, unsettled by Linton's defense, looked out of sorts in the second set as the visitors took control early, holding as large as a nine-point advantage en route to a quick 25-15 win.

Between sets, Moore let the team know they needed to go on the attack to make any headway against Linton.

"I told them before the third set that they had to start to nail the ball," Moore said. "If we got blocked, we would dig it up but we had to hit the ball.

"We played a lot better in the third set because we were relaxed and knew there was nothing to lose. Our passing was better and those are things you have to have."

With the message firmly ingrained, Cloverdale went after the ball with renewed vigor.

Holding a 12-7 lead, the two squads exchanged a memorable three-minute rally that ended with Lindsay Davis finally planting a kill through the Miner defense.

Moore was impressed with both squads during the point.

"That was probably one of the longest volleys I've ever seen," Moore noted. "It was terrific and that's what makes the game great."

The rally seemed to refocus the visitors, though, as Linton narrowed the six-point gap down to one before setting off on a point-for-point spree over the final 18 points of the match.

Both sides launched themselves after every ball as the Clovers tried to pull a set back while the Miners looked to end the match in three sets.

The first, and only time, one side took two straight points came when Linton scored the final two points of the match to win the third set 25-23 and sweep the hosts in the final regular season match for both teams.

It was a disappointing ending for the five Cloverdale seniors, Bailee Stevens, Christa Asbury, Jessica Winders, Lexi Branneman and Maddy Smith, though Moore said the group was a strong part of their second-place WCC finish this season.

"We have a fantastic group of seniors this year," Moore said. "They go above and beyond and they're great students, as well as great athletes.

"They're all cumulative honors students, they're all involved in different activities and they're a very involved group. They're all friends and have gotten along well, which has been nice to see and work with."

While the match finished on a much more positive note, some of the same errors that have plagued the Clovers all season continued to play their part and Moore said they had to be reduced before sectional play began.

"What I have trouble with is the service errors and the unforced errors," Moore stated. "Those have been hard for us to overcome.

"We've got things we need to work on these next three days and next week before sectionals."

Cloverdale takes on Cascade to open sectional play next Thursday and Moore said that after the loss last weekend, the Clovers would be in for a hard-fought struggle with the Cadets one more time.

"It's always a battle with Cascade, who's an improved team right now," Moore said. "We've split wins with them this season.

"It's not easy on the bottom bracket because Speedway has one of the top hitter in the state (in Melanie McHenry). She leads them in just about every category.

"But first we have to get past Cascade," Moore added. "It's one-and-done right now, so the errors have to go away and go away right now.

"When we played Cascade the first time, they had a new coach and were out of sorts. We lost to them in three sets at a tournament, so we know it's going to be a battle on Thursday."