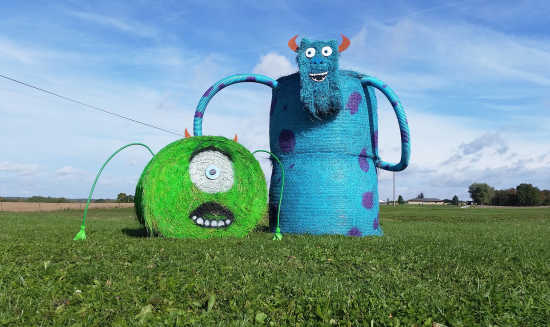 Say hello to Mike and Sulley from "Monsters Inc.," as created for Halloween from hay bales on the Becki and Bryce Arnold property near Fillmore.

Ten "Halloween" movies in all now. It's become quite a Halloween tradition.

Not unlike the evolving custom at the Becki and Bryce Arnold property near Fillmore. Last year a clever hay bale display of the Minions, those colorful critters from the animated film "Despicable Me," created a stir and had visitors stopping there at all hours to take photos.

So what would the Arnolds do for an encore this Halloween?

In the animated comedy, Sulley is voiced by John Goodman as a big furry, scary guy, while his one-eyed partner and best buddy Mike is voiced by comic Billy Crystal.

"Last year we started decorating our hay bales," Becki Arnold said, noting that part of the Arnolds' motivation was to discourage a dangerous prank in which their hay bales had been set on fire a few years ago.

"The Minions were a huge hit," she continued. "We had people young and old stopping to get a photo with them. So my husband and I knew we had to do another one this year, and we did.

"We have Mike and Sulley up now, and they have been bombarded with visitors," she told the Banner Graphic.

However, this Sunday from 2-4 p.m. will be even more special at the Arnolds' rural home along the Right-of-Way Road north of Fillmore.

"I am having my daughter Olivia dress up as Boo from the show ("Monsters Inc.") and she will have candy to share with the little ones," Becki Arnold said.

Visitors should feel free to bring their cameras, she said, noting that her family (including twin boys Sawyer and Tayler along with Olivia) enjoys the interaction.

"We just love that doing this small thing has truly brought smiles to so many people," she said, "and isn't that what our world needs right now? More smiles and giggles and less stress and worry?"

Last year the Arnolds even had adults emailing them to say how much they "loved driving by every day ... it makes them smile."

OK, so the Minions were those smile makers in 2013, and it's Mike and Sulley this year.

What about another encore in 2015?

The Arnolds are already thinking about it.

"Now my husband is saying we need to do a corn maze next year," Becki said.

As if their creations haven't already been amazing enough ...