Clover boys use loss to prepare for Pizza Hut Classic 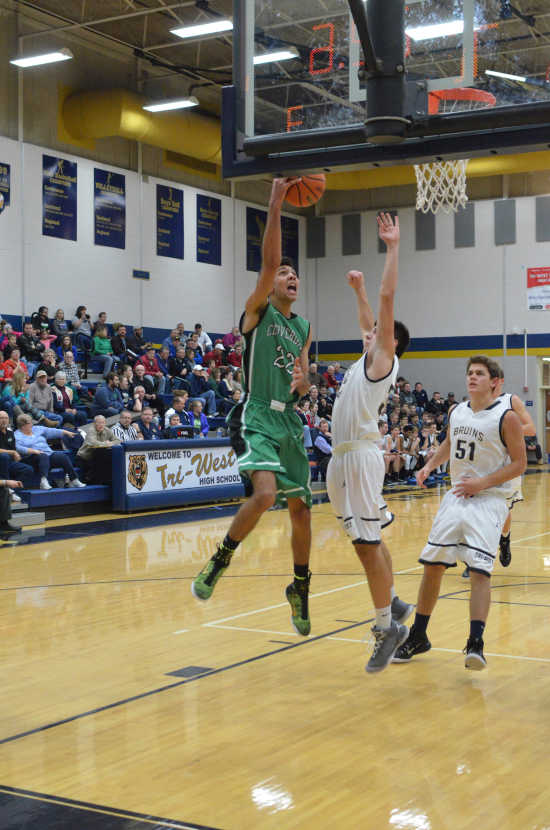 K.J. Coleman nails a hookshot from about eight feet, He finished with 29 points. (Banner Graphic/TRENT SCOTT)

LIZTON--If there was one game on the Cloverdale boys' basketball schedule that had a big red circle around it, Saturday night's trip to Tri-West would have been a likely candidate.

The Bruins were responsible for the only blemish on the Clover regular season record last season and, behind a record-setting night by Trevor Waite, downed the visitors again 96-64.

Cloverdale coach Pat Rady said Tri-West showed the Clovers how far they still need to go this season to play against quality teams.

"They're a good ball club," Rady said. "They're picked by some people to win the state in 3A and on this court, they play very comfortably.

"The take away from this game is that they showed us a lot of our weaknesses, so we have to go back to practice and work on the things they showed us we were weak at. Hopefully we'll use this as a learning tool and be better for it."

Tri-West wasted little time in attacking Cloverdale, rattling off 10 straight points in the opening 1:37 before Branston Scott replied with a pair of buckets.

Waite was more than willing to match baskets, as the senior guard buried four threes in the quarter to help give the hosts a 25-9 lead after one period of play.

The Clovers struggled with Waite on offense and had a torrid time breaking down the Bruin full-court press as the home side stole the ball 14 times in the game.

KJ Coleman helped to get the Cloverdale offense going in the second quarter by scoring eight points but was dwarfed by Waite's 14 points, as Tri-West stretched their lead to 52-25 at halftime.

Along with the turnovers, the Clovers were sunk by a lack of production behind the three-point line in the first half.

The Clovers were 1-of-9 from behind the arc compared to the Bruins, who were 9-of-16 at the same point in the game.

Coleman and Cooper Neese tried to cut into the Tri-West lead, combining for all 22 points Cloverdale scored in the third quarter but could not make any dent in the hosts' lead, falling further behind at 80-47 with eight minutes to play.

Waite, needing five points in the fourth to set a new school record for scoring in a game, duly scored the needed points in the final quarter as the hosts added a third loss to the Clover record this season.

Coleman finished with 28 points and 13 rebounds while Neese added 18 for Cloverdale in the losing effort.

Perhaps the most frustrating part of the night for Rady was not the game itself but the fact the team was still unable to prepare for games adequately due to not having the whole squad available since the season began.

"We need to get healthy," Rady noted. "We have not had two days since Nov. 12 where we've had all the guys in practice for two days in a row due to injuries, illness and other factors.

"Until we get two to three weeks with everybody healthy and coming to practice, it's going to be a long season because practice is where you get better. You can't get better by playing games but you can get better with practice time."

Cloverdale moves on and will be one of 16 participants in the Wabash Valley Pizza Hut Classic starting Dec. 26 at Terre Haute South High School.

Rady said in the short term, using Saturday night's game as a lesson would be important for play against more high quality opposition over the five-day event.

"If you use this as a learning tool, we can get something out of it," Rady said. "We need to work on the things they hurt us on because we're going to face that against good teams and we play good teams down the road.

"There are teams that are going to be the same caliber of Tri-West and we have to be able to match their play."