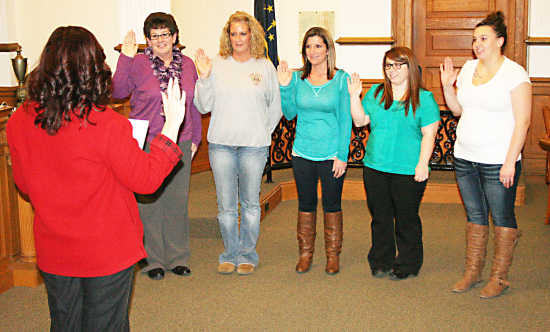 In an eventful couple of days at the Putnam County Clerk's Office, the staff hosted an open house for outgoing Clerk Marty Watts on Friday and then swore in the new Clerk Heather Gilbert on Monday. (photo by JARED JERNAGAN)

Having occupied her current office for 16 years, Putnam County Clerk Marty Watts has probably lost count of the number of times she's issued the oath of office.

It's simply part of the job for the clerk of courts, alongside overseeing elections, handling court filings, issuing marriage licenses and numerous of other duties.

Issuing the oath one last time on Monday was a bit different for Watts. This time, she was swearing in her replacement, clerk-elect Heather Gilbert, before stepping away to retirement, more free time and who-knows-what. 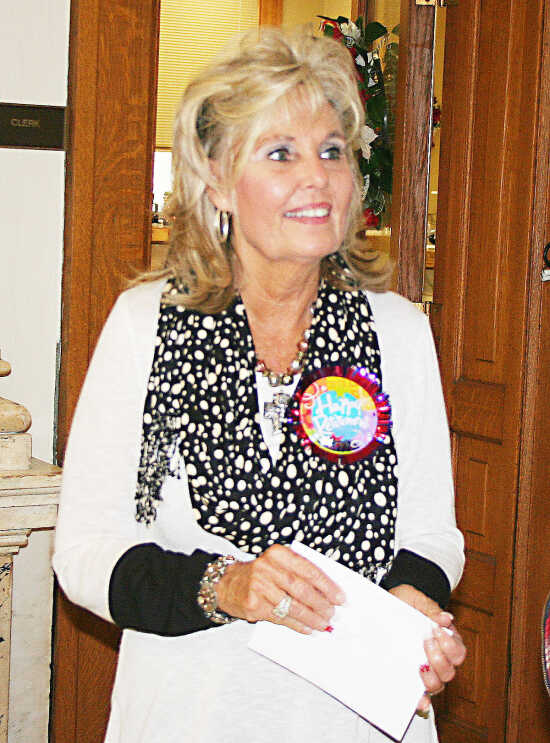 During her open house, Marty Watts enjoyed the company, taking time with each of her well wishers and sharing her thoughts on 35 years in the courthouse -- 24 as an elected official. Then on Monday, Watts administered the oath of office to Heather Gilbert. In her first official act as clerk, Gilbert then swore in her deputies for the coming term. (photo by JARED JERNAGAN)

"My objective is going to be to stay busy. I'll probably spend a lot of time with my two granddaughters." 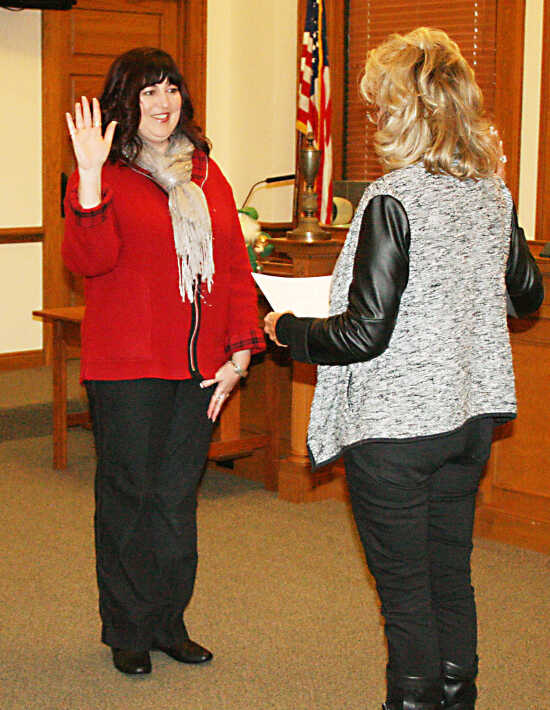 On Monday, Marty Watts administered the oath of office to incoming clerk Heather Gilbert. During her open house, Watts enjoyed the company, taking time with each of her well wishers and sharing her thoughts on 35 years in the courthouse -- 24 as an elected official. In her first official act as clerk, Gilbert then swore in her deputies for the coming term. (photo by JARED JERNAGAN)

It will certainly be an adjustment for a woman who got her start in county government as the bailiff-court reporter in County Court (later renamed Superior Court) back in 1976.

Serving until 1977 for Judge William Vaughn, Watts took a few years off for the birth of her son Shaun. During the off time, she earned her real estate license, but returned to the courthouse in 1982, this time in the microfilm department. 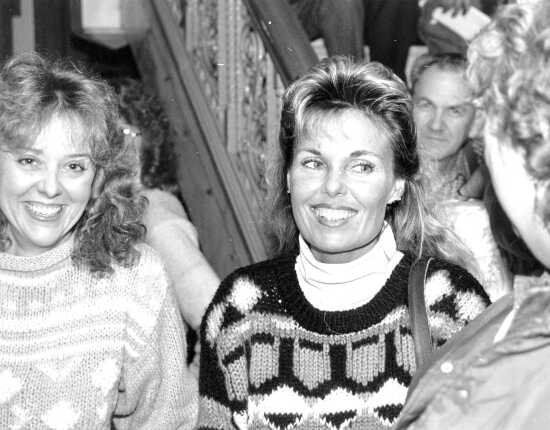 A veteran of six successful campaigns, Marty Watts celebrates a victorious election night in the 1990s. Currently the county clerk, Watts will retire on Dec. 31 after 35 years in the courthouse and 24 as an elected official. (Banner Graphic file photo)

Eight years as recorder followed, with Watts returning to the clerk's office in 2007.

Having started in the courts, Watts said she always felt at home in the clerk's office.

"I think having that experience helped me," Watts said. "However, it does not prepare you for running an election."

She has certainly seen quite a bit when it comes to running an election. It was punch cards in her first two terms, which were much more time-consuming and labor-intensive.

While 21st-century technology has come with its own challenges, Watts has tried to stay on top of it all.

Even so, she's ready for a new generation to take over and tackle the next set of changes.

"Heather's going to do a great job," Watts said. "I'll only be a phone call away, but the laws change so much all the time. But Heather's been here and she knows that."

Monday's swearing in was a special time for Watts, Gilbert and the other deputies. After taking her oath from Watts, Gilbert, in term, administered the oath to the deputies.

The ceremony closed with dozens of hugs and pictures, a few tears and plenty of laughter.

Watts joked that in all the years and different departments in the courthouse, she never managed to get higher than the second floor. Even her time in court was before the second courtroom was completed, so County Court was housed on the first floor.

It's fitting that her career began and ended tied to the courts.

"It's been challenging in some ways yet it's been so enjoyable," Watts said. I love the people of Putnam County. If I was going to end my career, I'd like it to be here (in the clerk's office). My passion has always been the courts.

"And my staff has been great."

Now it's on to new challenges, including the possibility getting involved in new ways.

"I may fill up my time with volunteering too," Watts said. "There have been a lot of organizations here in town that have asked me to help out and I always felt like I was too busy."

There's also the likelihood of travel with husband Max. Beyond simply vacationing, Watts looks forward to not worrying about when they return.

"The only thing I can say with this retirement is we won't have to be on a schedule," Watts said.