Cloverdale gets best of Mustangs 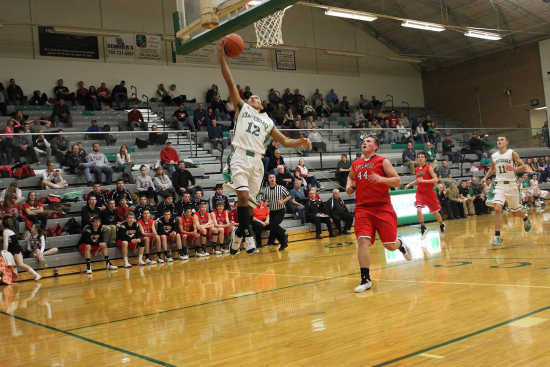 Marquise Moore lays it off the glass after a steal in the win against Edgewood.. (Banner Graphic/JOHNATHON GOODE)

CLOVERDALE-- Cloverdale fired on all cylinders Tuesday night as the boys' basketball team secured their most impressive win of the season against the Edgewood Mustangs, 82-65.

"I thought it was by far the best game of the year that we have played on both ends of the court," Clovers' coach Pat Rady said. "We had to. Edgewood is a very good ball club. They have a great coach. We had to give our best and I think we played the best we have all year."

Cloverdale (10-4 1-0 WCC) had 17 assists for the night including three by freshman Jalen Moore and 10 by senior Marquise Moore, but most of the work came from transition off of missed field goals and turnovers by Edgewood. Edgewood had 12 turnovers on the night.

Outside shots were all the Clovers would allow the Mustangs (7-4 3-0 WIC) to muster in the first half because they only made two, two-point field goals, but they made six three-point baskets.

"We mixed up the defense," Rady said. "I thought we did a good job of mixing the defenses and even the offenses. The ball had eyes. I thought we played very unselfish. We made the right plays. Our defense gave us some steals and good layups. I'm pleased with the way the boys played tonight."

On the other end of the floor sophomore Cooper Neese, senior KJ Coleman and Marquise combined for 30 first half points. Neese hit two of his five threes in the half.

Three-point baskets came in spurts in both halves. In the first half there was a string of six straight made threes by both teams on seven possessions. Four of those were by the Mustangs and two were by Mustangs' senior Austin Ranard. Ranard had 22 points total. Neese opened up the second half with two consecutive three pointers.

Most of the assists were sparked by transition, which is what Rady wanted from his team. His team went on a 14-4 run in the third quarter with five transition layups by Marquise. He capitalized with a double-double scoring 32 points.

"Our job was to push the ball up the floor," Rady said. "We wanted to try to push it up and attack the basket. We wanted to do that on offense. We were fortunate tonight to get that done. Our job tonight was to get transition. We got the ball with a missed basket and we told the kids we wanted to bring the ball up even quicker. The main reason is because of Edgewood's defense. They play a very good defense, so if we got the ball up quickly we didn't have to deal with that."

Neese benefited from the three pointers because of the inside-outside push that Cloverdale used. They spread the ball around the wing before pushing it in. The ball then was either shot or kicked back out, most of the time to a wide open shooter.

"That's in our offense (using the inside and out)," Rady said. "We try and take the three from a kick out. The post guys were playing behind, so if they're playing behind we want to use the kick out and we did. When our defense got in the passing lanes we got steals and that created fast breaks."

Both teams started the second half hot. Edgewood was only down five at halftime, 33-28 and the teams combined for 7 of 7 shooting to start the second half. Both of Neese's threes were included and two more threes by Edgewood.

Strength and perseverance helped Cloverdale when it came to and-one opportunities. They had four on the night and not one came easy. They were all challenged and against taller players. Edgewood had five guys over six-foot-two-inches tall.

Marquise and Coleman had all the and-ones and they were focused on nothing but the basket when they went up, while have a body on them.

"I thought we played tough tonight all the way around," Rady said. "I know that's repeating what I said, but it was the best we've played all year. We went and strong and finished. We haven't done that previously and I thought we did a good job of that tonight."

This was a really good test for Cloverdale, who has struggled early on but has won four straight. Edgewood has seven impressive wins including wins against Washington and Northview. Edgewood, who is a bigger team being 3A was good preparation for what is to come for Cloverdale basketball.

"This was really a good test for us," Rady said. "Edgewood was playing really well and had some big wins, so I was really pleased to get a win. This was probably by far the best win we've had all year."

Coleman was 6-for-6 from the field with 13 point before he fouled out with 4:15 left in the game.