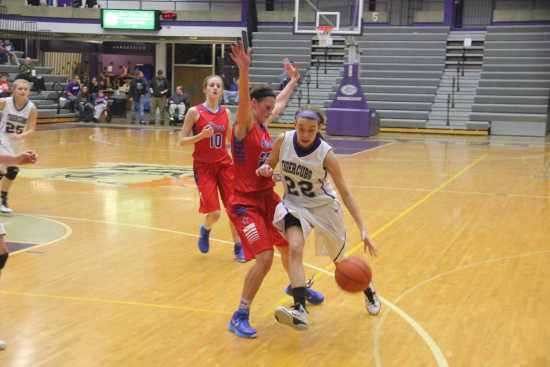 Even with the three-pointers flowing, the Tiger Cub girls' team fell short against Western Boone Saturday, 54-49.

Greencastle started the game in a hole, but thanks to the Tiger Cub shooting, in particular senior Delanie Stoltey's three three-pointers, the home team was only down two after one quarter.

Greencastle had to contend with good shooting from the Stars who were able to score both inside and from long range.

Greencastle picked up its game even more in the second, as it began to spread the ball around. Senior Callan Taylor was an orchestrator, dishing out five of her team's 10 first-half assists. However her teammates were involved as well.

Stoltey made a nice cross-court pass to junior Allison White who capitalized. Then later on a fastbreak, White gave a good feed to sophomore Mia Stevens who scored the bucket and the foul.

GHS outscored Western Boone 16-9 in the second half.

Tiger Cub coach Bradley Key praised the Greencastle effort in what was the last game of a very busy week for the county champs.

"I'm not sure that is was conditioning but just mental fatigue," the six-year Greencastle coach said. "It was an emotional week. It's hard to drive to Brown County and we were up for Cascade. So we started the game a little slow. They were up on us at 14-6 but we battled back. We were up at half."

The Lady Tiger Cubs continued to work for good shot but had a hard time getting those shots to fall.

Stevens took advantage of her opportunities in the paint, scoring six in the quarter but only she and White, who scored two, were able to find the net in the third quarter.

A few Greencastle turnovers helped Western Boone climb back into the game. It was 36-34 with a Greencastle lead going onto the fourth.

Greencastle started the final quarter in good shape. The players took to the three-point line and were up 45-41 with four minutes left.

Western Boone, however, was able to score from the field and get to the line for nine points in the quarter while Greencastle went scoreless for three minutes.

"We had a chance to extend the lead in the second half but give credit to Western Boone," Key said. "They made some adjustments. As a coach I didn't make some adjustments I thought I should've looking back. It was a learning experience and good competition for the sectional."

The Tiger Cubs were without senior Jessica Lenihan who will be having knee surgery. She was missed on the court as this was the last game to played at McAnally this regular season. The five seniors, Taylor, Lenihan, Stoltey, Madison Trout and Lauren Bridgewater, were honored at the start of the game.

"I've had five great ones," Key said. "I hate that Lenihan has a torn ACL. We miss her on the court but we really miss her leadership. She's been awesome for our program. She started as a freshman in sectional, so it's awesome to think that she's been with me for that long.

"Madison Trout has been great all year with attitudes. It's a great senior class. Delanie was great tonight, shooting-wise. Lauren Bridgewater is one of the better shooters that I have. Then Callan Taylor, I feel like I've been coaching her for 12 years.

"She's going to be missed so much. She does so many things for us. She plays at a high level. These seniors have been a lot of fun to coach," Key added. "You'll never want them to leave, but they've left a good mark on our program. They had a winning record every year they've been with me so I'm really proud of all of them."