Hailed as "the ultimate multi-hyphenate," three-time Tony Award-winning composer and lyricist Jason Robert Brown will visit DePauw University Friday and Saturday, March 6-7 as part of the School of Music's new Living Composers Festival at the Green Center for the Performing Arts.

During the intensive weekend visit, Brown will educate students about careers in the performing arts through a full schedule of workshops, coachings and performances, all of which are open to the public. 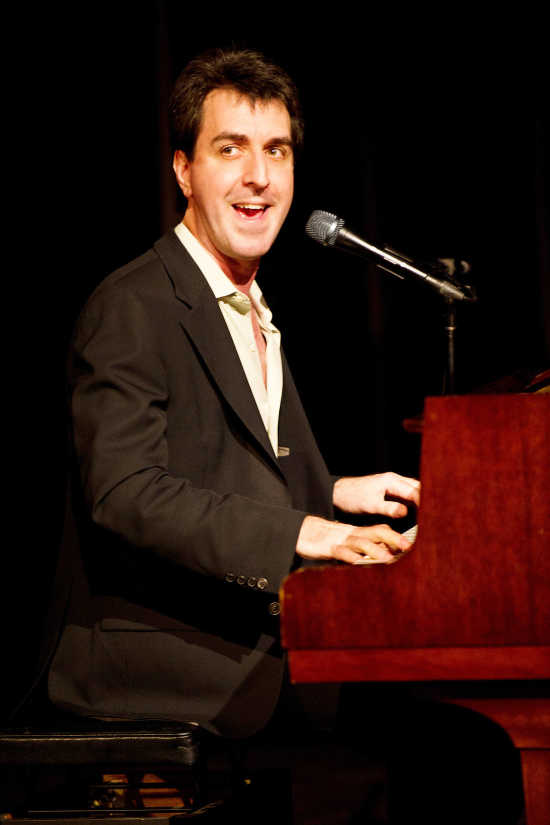 Of special interest on Friday will be a 6:30 p.m. master class with select School of Music vocal students in Thompson Recital Hall, and on Saturday a 10 a.m. panel discussion with DePauw alumni currently working as performing artists; a Student Cabaret of musical theater works (2 p.m.); and a Guest Artist Concert given by Brown (5 p.m.).

The composer was unable to travel to Greencastle when his visit was originally scheduled, during DePauw's fall production of the musical "Parade," due to an unexpected opportunity to have two of his works open on Broadway -- "The Bridges of Madison County," which received Tony Awards for Best Original Score and Best Orchestrations, and "Honeymoon in Vegas," starring Tony Danza, which opened at New York's Nederlander Theatre in January, following a run at The Papermill Playhouse in New Jersey.

A piquant synthesis of pop, rock and musical theater, Brown's musical style is sometimes compared to that of Billy Joel. Brown's music, however, definitely resonates with its own distinct character with lyrics that stir the emotions and a level of virtuosity that engages both audiences and performers.

"I'm impressed by his ability to compose emotionally compelling music that is aurally pleasing for audiences," said senior mezzo-soprano Brooke Addison, who will perform Brown's "Stars and the Moon" in the 2 p.m. Student Cabaret. "As an artist who has made it in the musical world, he has so much insight to share with us. His music combines emotion, beauty and artistry in such a way that I continually want to hear more."

At noon Saturday, the Janet Prindle Institute for Ethics and Department of Communication and Theater, co-sponsors of the festival, will also offer a related panel discussion on ethical issues in music and theater, moderated by Steven Linville, assistant professor and School of Music operations manager, with panelists Mark McCoy, dean of the School of Music; playwright and 1957 DPU alum Gretchen Cryer, president of the Dramatist Guild Fund; and DPU theater and communication professors Susan Anthony and Tim Good.

"Bringing Brown's music to life is an experience in itself," said Linville, who planned the visit and served as music director for the DePauw production of "Parade."

"The Living Composers Festival this week will allow students to work directly with the composer and witness how he inspires such powerful performances," he added. "They will learn how Brown creates his music and about working in the musical theatre industry, as well as have an opportunity to connect with alums who are currently working in the performing arts field."

Festival passes, which include all events, are available for $10, and can be obtained online (www.depauw.edu/music/tickets) and at the Green Center box office (Monday--Friday 12-4 p.m. and 6-8 p.m. and Sunday noon--8 p.m.). Passes for seniors, children and all students are free.