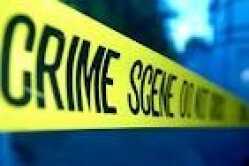 The initial investigation has revealed that just after 9 a.m., Clay County 911 received a call from Gary Page, 60, requesting police officers to come to his residence so "they could shoot him."

Approximately two minutes later, Clay County 911 received another call from a person at the scene advising that Page was at the Pines Apartments in Harmony and "has a firearm and was going crazy."

When Clay County deputies made contact with Page upon their arrival, he pointed his firearm at them and other people at the scene. This resulted in the deputies being forced to stop Page's lethal actions toward those at the scene by discharging their firearms at Page.

Page suffered gunshot wounds and was given first aid by the officers while they awaited the incoming ambulance. Page was then transported to St. Vincent Clay Hospital at Brazil where he died about an hour later.

An autopsy is scheduled for Monday morning in Terre Haute.