Man barricades himself in Greencastle house 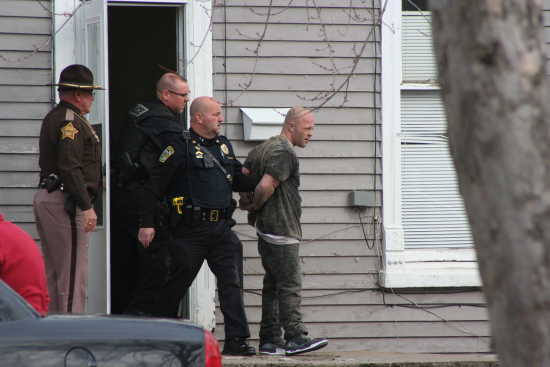 Joshua Joyner barricaded himself in a Greencastle house Thursday afternoon. When police responded to the residence to investigate a complaint, it was found he had a warrant. (BANNER GRAPHIC/Sabrina Westfall)

An Indianapolis man was arrested Thursday after barricading himself in the attic of a house in Greencastle.

Joshua Joyner, 34, is being held in Putnam County Jail on a warrant out of Hendricks County.

"Once we learned his name, we found there was a warrant for him out of Hendricks County," Sutherlin said at the scene.

When police arrived, Joyner had barricaded himself in the attic, and the police used a ladder from the Greencastle Fire Department to talk him out of the attic. He was transported to the Putnam County Jail on the warrant.

There were no additional charges as of 6 p.m. Thursday.

Sutherlin said the initial incident is still under investigation by the Greencastle Police Department.