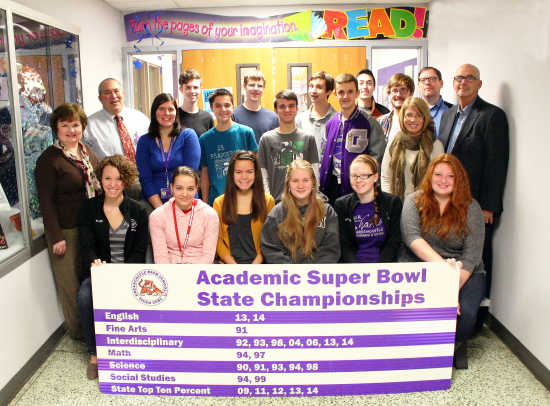 Among Hoosier high schools, there's the 1954 Milan Miracle. Or Carmel and its high school girls' swimming titles that practically dates back to the invention of the pool. Or Concord's annual march to the State Fair Marching Band finals.

Meanwhile, at Greencastle High School, there's a growing tradition that brings smiles to the faces of the administration as competition nears each spring.

As is two state championship teams each of the past two years.

And a total of 19 Academic Super Bowl championships over the years since the GHS Science team brought home the school's first title in 1990.

English and Latin teacher Nicole Kempf has been around for most of those titles, coaching in the competition for at least the last 17 years. Her GHS English and Interdisciplinary teams brought home state titles each of the past two springs and seemed poised to make another run this year.

"A three-peat would be awesome," she said while being asked about the growing tradition of excellence.

And a tradition it definitely has become, Kempf agreed.

"The school corporation seems to value it," she said, "in where we're allowed to have coaches for all the teams (six total)."

The students themselves have definitely bought in as well. On a recent snow day, while most of their peers were sleeping late, prowling Walmart or glued to their electronics, members of Kempf's English team weren't about to miss out on a single day of preparation.

"They (Kelly Hansen, Alex Weliever and Ben Gellman) got together to talk about (the Roman poet) Ovid without me," the spritely Kempf praised. "That's the kind of kid that does academic Super Bowl, not just on my team."

Greencastle sent four teams to the state competition at Purdue last May, coming home with the two titles and narrowly missing success in the other two subject areas.

State finals competition can be tough and the outcome gut-wrenching, as the coaches well know. Kempf, who was exposed to the Academic Super Bowl competition as senior at Rockville High School in 1990 when her Fine Arts team finished third, recalls her GHS team falling short of the title twice by missing on the very last question.

The continued success of the Greencastle academic teams has spurred more and more student interest, which is good because it means competition for spots on the individual subject teams.

Besides Kemp, the other GHS academic coaches are Glenn Hile (Social Studies), Robin Johnson (Fine Arts), Samantha Burke (Math) and Brad Kigma (Science) with Kathryn Dory serving as Academic Super Bowl coordinator. At present they are busy preparing for the area competition to be staged at GHS on April 21.

Each team prepares a little differently, Kempf says. She likes to give students the outline the second it's official. Then after the October coaches conference, the teams began preparing in earnest.

"We meet at least 10 times for 90 minutes, more if we go to state, she said, noting that this year's subject of Rome is right up her alley as an English and Latin teacher.

In preparation, teammates tackle practice questions and even write their own queries.

"I tell them to get inside the question writer's head," Kemp said, "and to be as mean as possible."

Overall it prompts quality discussion among some of the best and bright Greencastle has to offer.

"It reminds me of a small college atmosphere with a lot of class discussion," Kempf added.

One of last year's standouts, Hannah Gellman, who captained both title-winning teams last May, put that in perspective.

"Hannah said one of the things she appreciated most was being able to discuss literature with people she wouldn't have been in class with otherwise."

Meanwhile, Principal Hesler agrees that "it's been quite a success story."

So much so that he was motivated to replace the Super Bowl signage along Veterans Memorial Highway south of the high school and add a sign listing the 19 state titles near the flagpole at the northeast corner of the GHS main entrance.

"I want the kids to see it and be proud of their accomplishments," Hesler reasoned. "This is their trophy."

The new signage has also been designed a little differently than what was previously in place.

"It's been designed so we can add more years to it," Hesler noted. "That's the expectation. That's my expectation."

And that's what tradition will do for you.