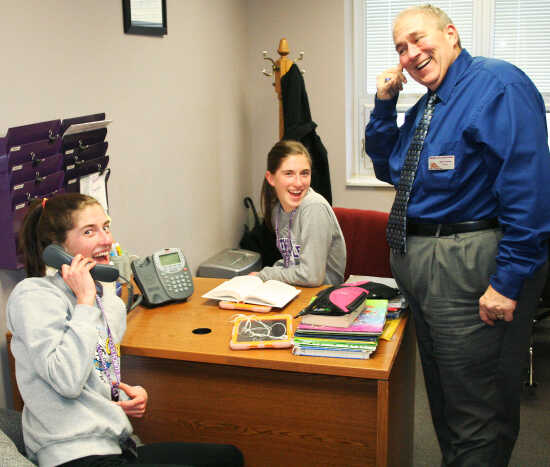 Call Greencastle High School these days and you'll get a quite cheery response.

Greencastle High School, where it's always a great day to be a Tiger Cub.

It's the embodiment of a new attitude and the indelible stamp Principal Russ Hesler and the new administration have imprinted on the school and the corporation.

"We want that positive feedback," he explained. "We want it to be a positive place for kids. It' s their school."

"A lot of good things are happening," Hesler said, specifically pointing to the Academic Super Bowl titles, Beth Ann Hansen being named a National Merit Scholarship finalist and an Indiana Academic All-Star, money being put into the school buildings and the new leadership of Supt. Dawn Puckett and the Greencastle School Board.

Hesler has said success is breeding success at the high school with GHS earning an "A" accountability grade from the Indiana Department of Education, the only Greencastle building receiving an A this time around.

"The goal," he explained, "is to do what's right for the kids.

"I'm fortunate to be surrounded by good people and have made good hires and they've brought new life to the staff. I have had veteran teachers telling me this is the best staff they can remember," Hesler said. 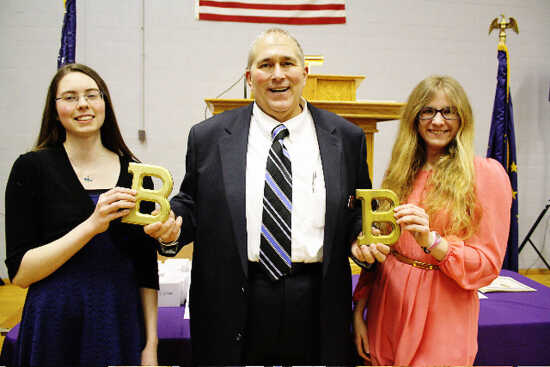 Until the recent Academic Honors Banquet at Greencastle High School, seniors Beth Ann Hansen (left) and Abigail Harms had never received a grade other than an A. GHS Principal Russ Hesler takes the opportunity to give the scholars their first-ever "B." (Courtesy photo)

Now in his 37th year at GHS, Hesler's office stands as veritable shrine to Tiger Cubs and the color purple.

"I've taught about every subject but English," Hesler smiled. "I wore so many hats it was just a blur."

But now he's been the high school principal officially for two years, not counting four separate interim principal stints as the position was passed around so often GHS endured nine principals in 12 years. Throughout those dozen years, Hesler was the assistant principal, often dispensing discipline as one of his duties.

"I get to wear the white hat (of the good guys) for a change now instead of the black hat," he said. "I get to have more interaction with the kids.

"Our obligation as a school," the GHS principal said, "is to have enough foresight to educate our students for what they want to be in the future."

Thoroughly enjoying his role as principal -- as colorfully illustrated by the purple-striped bib overalls he donned for the last day of school before spring break -- Hesler was asked when he might retire. The thought really hasn't entered his mind.

"I'm still having fun," he said. "I still learning. I'm still enjoying the kids. Why would I think about retiring?

"I've had a diverse career," Hesler said, "but it's never been boring.

"I always seem to be called in to clean up the messes," he continued. "When I took over wood shop they had been through three teachers. There was one working piece of machinery and the textbooks had been sawed in half."

Hesler, a product of Edgewood High School in Ellettsville and a 1977 Indiana State University grad who earned his master's from ISU in 1978, said he never set out to be a school principal.

"I was never my goal," he said, indicating his philosophy nonetheless has been "if you always do what you think is right and what's fair, good things will come to you. I think this is a good thing here."

To have GHS graduates still in town serving in leadership roles is a big plus, he said, listing Police Chief Tom Sutherlin, Fire Chief Bill Newgent, City Clerk Lynda Dunbar and businessmen like Bill Shuee as being role models and community leaders.

He pointed to the motto on the wall near the GHS office: Enter to learn, depart to serve.

"Our graduates are staying around and doing great things in the community," Hesler added. "We're very proud of our former students and alumni that are here." 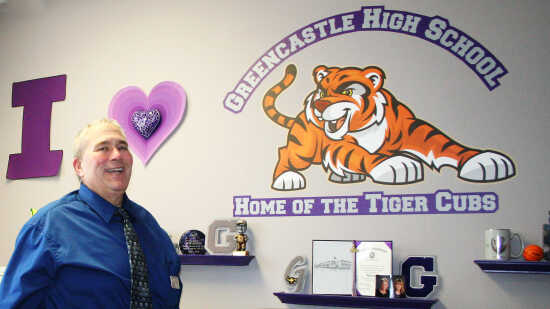 In his principal's office decorated in purple and Tiger Cub motif, Greencastle's Russ Hesler is ready for another school day. (Banner Graphic/ERIC BERNSEE)

The shift to technology is exciting as well, Hesler said, noting GHS will host a tech conference June 8 with 400 educators expected to attend.

Hesler recalled how when he taught drafting, he went from staring out using a T square and triangle to utilizing autocad.

"It's the job of the teacher or coach or administrator or anyone to set students up to be successful. That's what we try to do.

"Work hard and treat your students fair is all I ask of our teachers."

As a coach who required his wrestlers to wear dress shirts and ties the day of their meets and always address their elders with "Yes, sir" or "No, sir," Hesler realizes there is still room for improvement despite seeing the climate and culture change for the better at GHS the past couple of years .

"I want to get our tests score up," he offered.

"There have been a lot of changes as I look around the corporation and administration," he added. "Changes isn't always a good thing."

But in this case, it certainly seems to be.