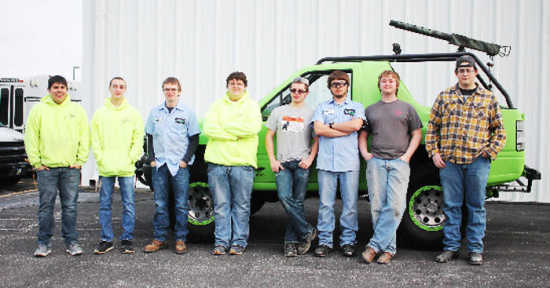 The Area 30 Career Center Automotive Collision program claimed first place in its class at the recent 2015 Indianapolis World Of Wheels.

Students in Rob Worman's Automotive Collision class have been rebuilding a 1990 Isuzu Amigo over the last three years, passing the project from class to class until it was completed in early February 2015.

Students started with an SUV that was ready for the scrap heap but with a vision of an off-road show stopper, students dove into the project with both hands. 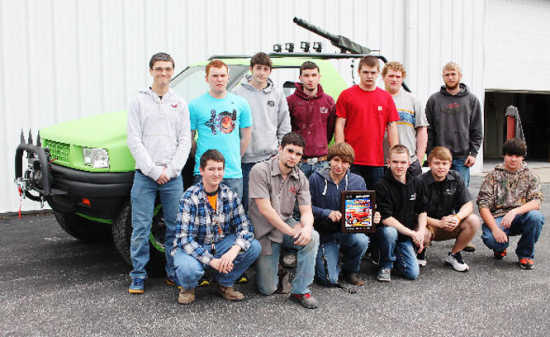 Working to make the small truck road-worthy by fixing some frame and suspension problems, they added a three-inch body and suspension lift to give it just the right amount of altitude to clear a new set of 35-inch tires.

After the bodywork was complete, the students covered it with raptor liner which was the product of choice. It was tinted lime green and charcoal gray to make it really stand out.

The Area 30 students wanted to give the project a little something extra, so with the help of the welding class, they designed and built a T-shirt air cannon that was fitted to the rollbar.

Meanwhile, students from the WIRED class used 3D software and a 3D printer to design and print a mold that was used to build parts for the display. Also, students from the Computer Illustration and Graphics program designed the informational display board.

Several weeks of preparation went into the design and construction of the desert scene display used to highlight the Amigo at the World of Wheels.

Students spent three days at the show experiencing the thrill of showing off their hard work and talking to spectators and other show exhibitors. The excitement of taking home a first-place plaque made it a rewarding experience for the students.

Worman said he is proud of his students for their hard work and ability to come together as a class.

"After five years of participating in this show, it has been the most rewarding project to complete because so many classes were involved," Worman added.

The Area 30 Career Center Automotive Collision program does not have a project slated for next year so it is hoping to partner with someone from the community who has an interesting car or truck that they could build for next year's Indianapolis World Of Wheels.

Anyone interested in submitting a project vehicle for consideration is asked to go to the Area 30 Career Center website, www.area30.k12.in.us, click on Programs, then Automotive Collision Technology and fill out the project submission form.