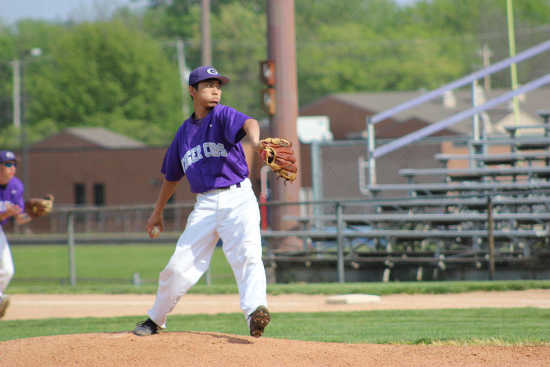 Senior Ichiro Mozawa had a good night pitching. He had six pop flies and fly outs and three strike outs. He nearly had the game-tying RBI in the bottom of the seventh. (Banner Graphic/ Johnathon Goode)

Greencastle senior Ryley Cook was called out sliding home in a n effort to tie the game at eight. Instead the Tiger Cub baseball team fell just short to the Owen Valley Patriots Thursday night at home, 8-7.

The Tiger Cubs found themselves in a late hole down 8-2 going into the bottom of the seventh for their last at bat. Patriots' sophomore pitcher Ryne Heckman had a pitch count in the 70s, but their skipper still urged him on.

Daniel Wilson, Levi Lewis and Noah Cook all singled to start the bottom half of the inning with Wilson scoring on Cook's single. Heckman finally recorded an out on a fielder's choice, but then he allowed a single and a walk that scored two more runs.

Brian Greene, coach of the Patriots, took Heckman out after that walk and replaced him with Hunter Sturgeon. He did his job striking out Anthony Rossok, but he issued back-to-back hits on the next two batters. Ryley Cook singled and drove in Trey Scanland. With Cook on first base, senior Ichiro Mozawa came up to bat. Mozawa hit a liner into deep left field along the fence and the speedy Cook went all the way from first and rounded third base with a hesitation.

"What I'm upset about is where was that fight earlier," Tiger Cub coach Troy Remsburg said. "We didn't have any fight after the second inning. It seemed like we were satisfied after that. That and having seven errors didn't help matters either. We have to play every inning like we played that last inning."

Down only one run, Cook made the decision to go all the way home after rounding third base. Patriot catcher Chase Roberts waited at home for the throw and as Cook tried to slide under him, Roberts made the tag that was called for the final out of the inning. It was a close call and could have easily gone the other way.

Greencastle had gotten a 2-0 lead early in the second inning and relied on first time pitcher of the year Mozawa to keep it. He did his job until the fifth inning.

"A 2-0 lead doesn't guarantee anything," Remsburg said. "Not a three-run lead, a five-run lead or any run lead. It's just frustrating."

Mozawa did not pitch fire, but he made pitches that created pop flies and fly outs. He had six combined and he also had three strikeouts.

"For his first time pitching this year he did real well," Remsburg said of Mozawa. "We were a little bit worried being the first time he's pitched this year. He pitched a little last night in practice and we saw he was going to be all right. We just didn't want him to over pitch or over think. He was very effective."

After walking the first two batters in the fifth inning, Remsburg made the move to sophomore Trey Scanland.

Scanland had three hits off of him and a walked batter and six runs scored in the inning. The first two were charged to Mozawa.

"That's when we started having some mental mistakes," Remsburg said. "We had some errors start to catch up with us. They hit the ball some, but we didn't make some of the plays we should have."

Owen Valley added to their lead in each of the two final innings with a run apiece.